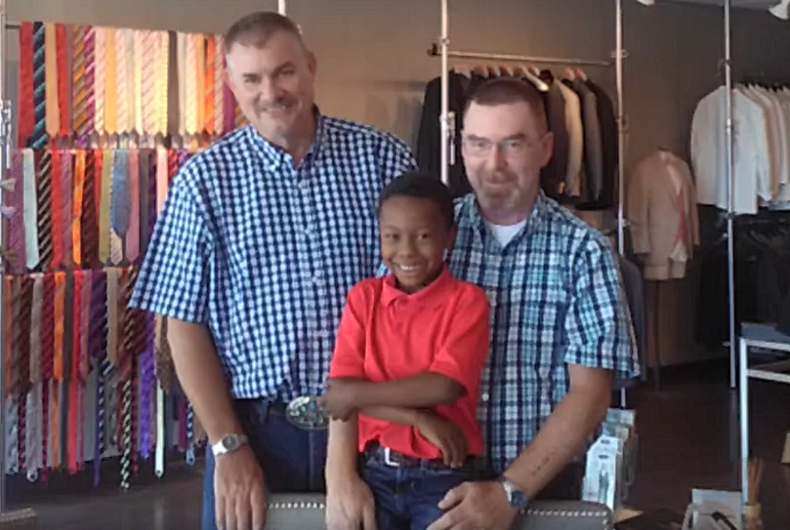 A gay man filed a federal suit in Oklahoma, claiming that his family was the object of verbal abuse, vandalism, and arson in an attempt to get him to leave town.

Randy Gamel-Medler, 59, and his husband moved to Hitchcock, Oklahoma, in 2016 with their seven-year-old son. Gamel-Medler is white and his son is African American.

Gamel-Medler says that he immediately got involved in town politics, befriended locals, and became town clerk. He believes that taking a position in local government, though, made him a target. “I think once I became clerk, and they found out they had a queer clerk with a black kid running the city, it just drove them crazy and they couldn’t take it,” Gamel-Medler told the Associated Press.

His complaint alleges that he was first threatened in September last year when a town trustee, upon learning that Gamel-Medler’s son is African American, asked, “What’s going to happen when your house burns down and we don’t send out the fire trucks?”

Earlier this year, he says that he was clearing an obstruction from the road when he got called a “fucking queer” by a woman who was trying to enter his car. When she realized the car was locked, she shouted, “I’m going to grab your little boy, rip his n***er head off, and shit down his throat.”

In both instances, Gamel-Medler says that the sheriff’s department refused to take a report and cited free speech concerns to explain why the car incident wasn’t criminal.

He also says that people threw gravel at his house and that someone posted a sign outside the post office that said, “the town clerk is a fucking queer.”

On May 28, Gamel-Medler’s house burned down after he heard the sound of glass breaking in the garage. Even though the fire department is located one block away from his home, there was no response until the house had burned down. He says that several of his neighbors – including the police chief – got lawn chairs and watched his house burn down.

“When our family moved to the town of Hitchcock in rural Oklahoma we thought we were buying our last house, we wanted to know our neighbors by their first names and grow old together, but we were soon met with hatred, suspicion, and discrimination,” Gamel-Medler said. “We were terrorized, murder threats were made against our seven year-old African-American son. Town officials conspired to run us out of office, all while local law enforcement ignored our pleas for help. We are now left with the last 27 years of our life literally erased. What do we do now?”