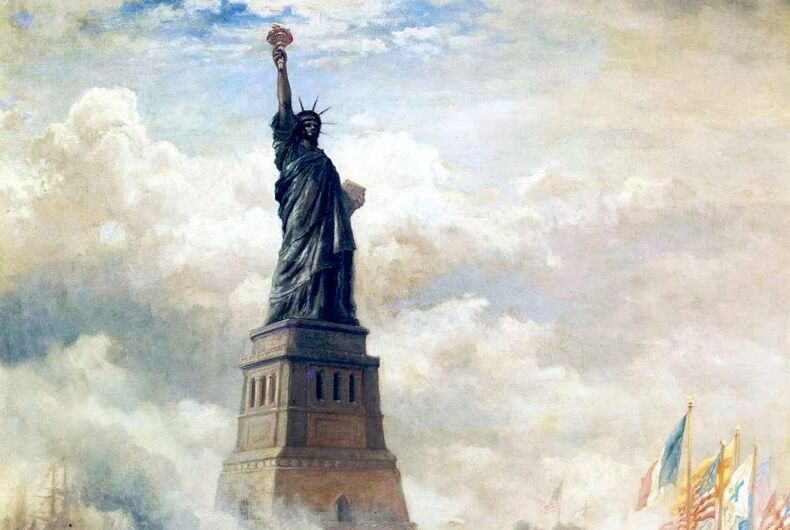 Give me your rich, your whites,

The 20-somethings of your high-skilled class,

Send these, the privileged, well-employed to me,

I shut my lamp on all the lower castes!

Donald Trump is pushing a Republican bill, the Reforming American Immigration for Strong Employment Act, or the RAISE Act, introduced by Senators Tom Cotton (R-AR) and David Perdue (R-GA). The bill would drastically shrink legal levels of immigration by 50% by cutting the number of green cards issued. It would also callously execute an upper cap of 50,000 refugees admitted each year, and eliminate the visa diversity lottery.

Based on a point system, it assigns the greatest number of points to applicants between the ages of 26 and 31 years of age who are highly skilled, fluent in English, and have earned doctorate degrees and have been offered a job with an annual salary at least three times the average salary for the region.

During a press conference announcing the measure, Trump’s senior policy adviser, Stephen Miller, trashed the long-established image of the Statue of Liberty standing proudly in the harbor as a beacon of light and hope for the downtrodden of the world. The statue was originally intended to be called “Liberty Enlightening the World,” from Emma Lazarus’s great sonnet “The New Colossus.”  The fundraising committee responsible for the building costs of the statue’s pedestal asked the young Jewish American poet in 1883 to contribute her work to the fundraising effort.

Lazarus was very concerned as she wrote the sonnet that Liberty Enlightening the World be understood as a beacon for Russian Jews suffering the cruel oppression of pogroms spreading throughout the Pale of Settlement (the area of government confinement of Jews in Eastern Europe). But she pointed the beacon in her sonnet toward not only Jews, but upon people suffering throughout the world, as a moral mission of the United States.

Send us your tired, your poor

During a reception held in New York City in 1886 at the statue’s dedication for Liberty’s French sculptor Frederic Bartholdi, the opening sentence of the celebratory speech for him stated, “Here we have a statue that welcomes the stranger.”

RAISE paradoxically LOWERS (Leaving Out Workers and English-less Refugee Seekers) immigration. It contradicts the meaning of not only the true intent of our majestic Statue of Liberty, but even more importantly, betrays the image that the United States of America has projected as embodying “the shining beacon on a hill,” attributed to Puritan leader and first governor of the Massachusetts Bay Colony, John Winthrop, who lived from 1588 to 1649.

Possibly, however, Steven Miller got it right by exposing the great myth of “American Exceptionalism.” In truth, Winthrop promoted neither religious tolerance nor democratic principles. In fact, he despised democracy and diversity of thought while advocating and practicing a form of authoritarianism.

The Pilgrims, who left England for Massachusetts in 1620, originally had strong connections with the Church of England, but they were disenchanted with what they viewed as the church’s compromises with Roman Catholicism. They came to North America with hopes of establishing a purer form of Protestant Christianity than they had found in their native land.

These “Puritans” separated from the Church of England to establish their own religious institutions, but they were not interested or willing to extend to others the religious freedom they were seeking. They believed that they were a divinely chosen people, and soon established “a biblical commonwealth” crafted from their own form of Christianity in which the church and the state were to support and protect each other.

If they had a chance years later, they would have soundly rejected most of the tenets enumerated in the Bill of Rights.

During colonial times, religious dissension was not tolerated. For example, the Pilgrims “warned out of town” a Sephardic Jewish merchant. They also enacted an anti-Catholic statute asserting “that no Jesuit or ecclesiastical person ordained by the authority of the pope shall henceforth come within our Jurisdiction,” and they banished Quaker missionaries.

Later, as Quakers kept coming, the Puritans enacted harsher penalties, for example, cutting off their ears, or using hot irons to bore holes through their tongues. Then, between 1659 to 1661, Puritans executed four Quakers on the gallows on Boston Common. Other religious nonconformists like Roger Williams and Anne Hutchinson were compelled to flee Massachusetts.

At his trial in 1635, Williams foretold what would be echoed by many during the coming centuries, that “the civil state [must not] impose upon the soul of the people a religion, a worship, a ministry. The state should give free and absolute permission of conscience to all men in what is spiritual alone.”

The Republican and Presidential-supported cruelly regressive immigration proposal will have the effect, if passed, of forcing Lady Liberty and Emma Lazarus to sob. It will go against the statue’s promise of

Sending these, the homeless, tempest-tost to me,

I lift my lamp beside the golden door!

Yes, the “golden door” of our country; not the tacky way-over-the-top golden toilet in Trump Tower that currently rains down on us.