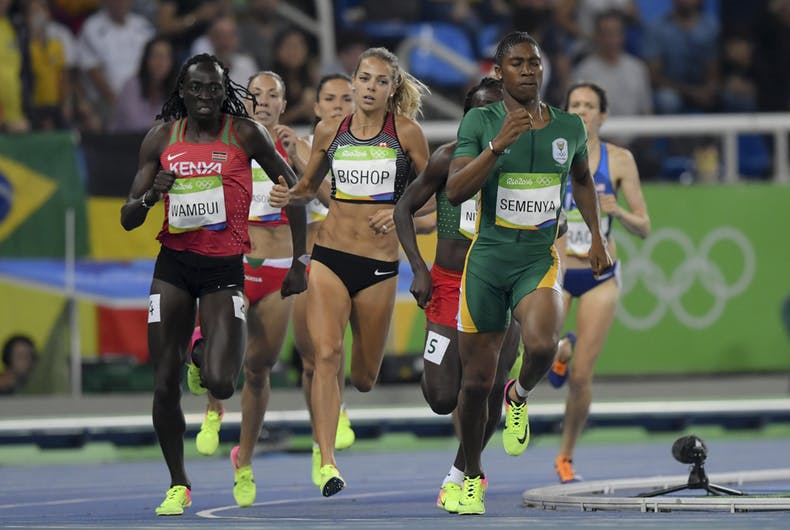 Caster Semenya competes during the women's 800m in the Rio 2016 Olympics GamesPhoto: Shutterstock

The international athletics organization that is prohibiting the South African track star Caster Semenya from competing as a woman said that she is free to compete in men’s events.

Semenya is a cisgender woman – she was assigned female at birth and she identifies as a woman – who has a naturally elevated level of testosterone.

Last year, the International Association of Athletics Federations (IAAF) announced a rule that women with high levels of testosterone must take hormone suppressants to compete as women. The rule only applied to the 400, 800, and 1500 meter track events, the exact three events that Semenya competes in.

Earlier this month, she lost her appeal to change the rule.

Now the IAAF has said that she is free to compete with the men, even though she’s not a man.

“It is the athlete’s right to decide (in consultation with their medical team) whether or not to proceed with an assessment and/or treatment. If she decides not to do so, she will not be entitled to compete in the female classification of any Restricted Event at an International Competition,” the IAAF said in a statement.

The IAAF was responding to a letter from the World Medical Association, which said that it would be “unethical” for doctors to alter a person’s hormones just so they can compete in sports.

“We have strong reservations about the ethical validity of these regulations,” wrote WMA president Dr. Leonid Eidelman. “They are based on weak evidence from a single study, which is currently being widely debated by the scientific community.”

“It is in general considered as unethical for physicians to prescribe treatment for excessive endogenous testosterone if the condition is not recognized as pathological.”

Semenya has already said that she will not take hormone suppressants, and she has not announced her retirement as an athlete. She might be considering competing in other events – those longer than a mile or shorter than 400 meters.

Fellow South African Trevor Noah used a segment on The Daily Show to express support for Semenya. He pointed out that other athletes have genetic advantages that are usually celebrated in sports, like Michael Phelps’s low lactic acid production or Shaquille O’Neal’s height.

The IAAF wants to alter runner Caster Semenya’s hormones for… being too good at running? pic.twitter.com/lhABEyyzCa