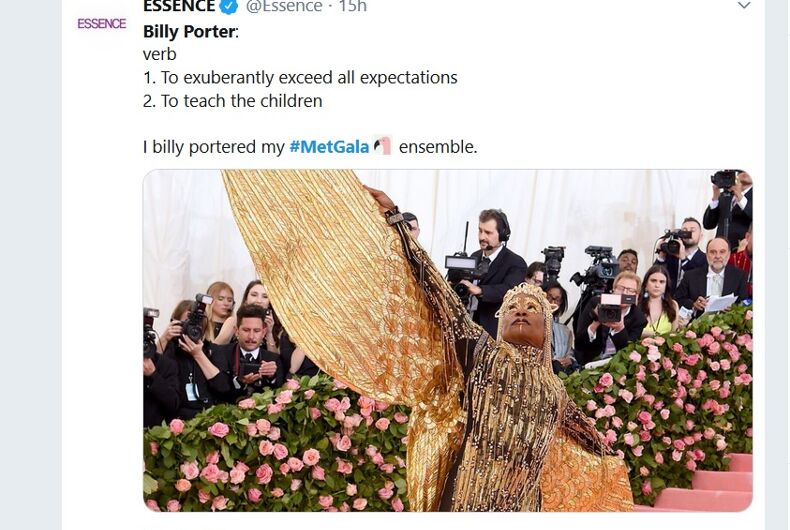 Each year, the Metropolitan Museum of Art in New York City hosts a fundraiser for their Costume Institute, known as the Met Gala.

And each year’s gala has a theme. This year’s theme was camp, the over-the-top, very queer style that mixes pop culture and haute couture.

Here are some great looks from this year’s Met Gala.

Everyone is talking about Pose star Billy Porter’s “sun god” look, complete with six men to carry him.

Katy Perry came as a chandelier….

And left as a cheeseburger.

Katy Perry being a hamburger and Jennifer Lopez walking in on her in the bathroom at the #metgala will forever be iconic pic.twitter.com/BbzObt8cZw

Katy Perry changed out of the chandelier….into a cheeseburger. #MetGala pic.twitter.com/cDCskPVpwt

Lady Gaga had three reveals, taking off one dress to show another one underneath.

no one:
lady gaga: HERE YOU ARE MY FOUR DIFFERENT OUTFITS FOR TONIGHT#MetGalapic.twitter.com/6k7Bx1xOsS

Michael Urie dressed up as gender fluidity itself.

Zendaya was straight out of a fairy tale.

I live, breathe and die for Zendaya #MetGala pic.twitter.com/sgI4MtZI3M

7. Laverne Cox at the #metgala pic.twitter.com/Sxxzei3o3w

While Jared Leto had been slayed.

16. Jared Leto at the #metgala pic.twitter.com/KagmG9fmXD

21. My god Ezra Miller is a genius. #MetGala pic.twitter.com/dVILnTpuq2

11. Serena Williams at the #metgala

CURTAIN UP! Welcome to the #MetGala! pic.twitter.com/11I4yAuyPZ

Speaking of RuPaul, she might have showed up in one of the most fiercely camp looks of the night.

As America’s most famous drag queen, one would expect him to show up in drag to a camp-themed fashion show. Instead, he wore a sparkly pink-and-black zebra suit because the organizers wouldn’t pay him to dress in drag.

#rupaul would go to the grocery store like this but showed up to the #MetGala wearing this 🤦🏿‍♀️ pic.twitter.com/XucGsvxQPn