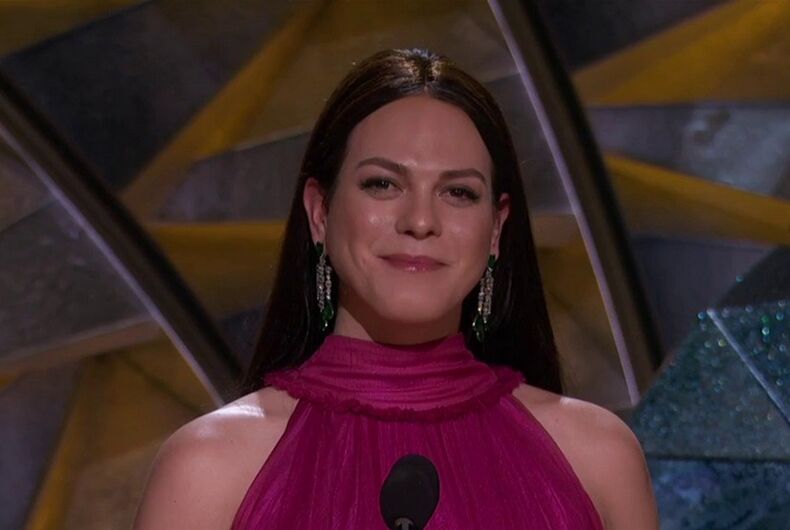 From the host’s jokes to the ads, there were plenty of LGBTQ moments at the Oscars last night. Here are some highlights.

A Fantastic Woman (“Una mujer fantástica”) is a Chilean film about aspiring singer Marina and the horrific transphobia she endures when her lover Orlando dies. It won Best Foreign Language Film.

Not only is A Fantastic Woman a story about a transgender woman, the role of Marina is played by Daniela Vega, who is transgender herself.

Call Me by Your Name was nominated for several Oscars – including Best Actor and Best Picture – and it took home the award for Best Adapted Screenplay.

Out writer James Ivory, who is the oldest person to win an Oscar at age 89, thanked the author of the novel on which the film is based. He also thanked “my life’s partners, who are gone.”

One of the best moments last night didn’t even happen in the show itself. Walmart ran an ad that referenced Black Panther, with a kid playing superhero and being told it’s time for bed… by his two moms.

The ad doesn’t make much of a fuss, which makes it all the more amazing.

Sufjan Stevens’s sexuality has been the subject of rumors among fans due to his often ambiguous lyrics. There’s even a Facebook page entitled “Is This Sufjan Stevens Song Gay Or Just About God?” with over 20,000 followers, poking fun at his fans’ speculation.

His song “Mystery of Love,” which appears on the soundtrack for Call Me by Your Name, is an exception: with a reference to Hephaestion, the male lover of Alexander the Great, there isn’t much ambiguity here.

Stevens was nominated for Best Original Song but didn’t end up winning. He performed “Mystery of Love” at the show.

Hauntingly beautiful! @sufjanstevens takes the stage with “Mystery of Love” from Call Me By Your Name. #Oscars pic.twitter.com/hDP25e5pkG

Host Jimmy Kimmel found humor in politics at the Oscars, and many of his jokes were about the Trump Administration and sexual harassment in Hollywood.

Ha also poked fun at Mike Pence. When talking about the film Call Me by Your Name, which didn’t make a lot of money at the box office, Kimmel said, “We don’t make movies like ‘Call Me By Your Name’ for money. We make them to upset Mike Pence.”

Host Jimmy Kimmel filled the 2018 Oscars with barbs about sexual misconduct and Hollywood’s lack of diversity. Here are the comedian’s best jokes from the ceremony. https://t.co/JsAmf6qbWh pic.twitter.com/tngju7rn7t

An accomplished singer herself, Vega presented the award for Best Original Song. She is the first openly transgender person to present an award at the Oscars.

“It’s something very special, something important, because when you unlock the door, the idea is that the door stays open,” the Chilean actress told W.

Rachel Morrison was nominated for Best Cinematography for her work on Mudbound, becoming the first woman and the first lesbian nominated in that category.

Working with director Dee Rees, she shot a Samsung Galaxy ad that aired during the broadcast last night. The ad shows two women hanging out in bed and looking at their devices, and Rees and Morrison appear together towards the end, eating popcorn at the movies.

Adam Rippon wore a leather harness on the red carpet

Having a leather moment at #oscars2018

Out figure skater Adam Rippon just got back from Pyeongchang, and he’s already going to the Oscars.

His S&M-inspired red carpet look by designer Moschino featured a leather harness. He also didn’t wear any socks. On Instagram, all Rippon said about the look was that he was “having a leather moment.”

Adam Rippon is wearing a Jeremy Scott harness to the Oscars.

This lawyer was accused of lusting after an al Qaeda terrorist. Now he’s suing.