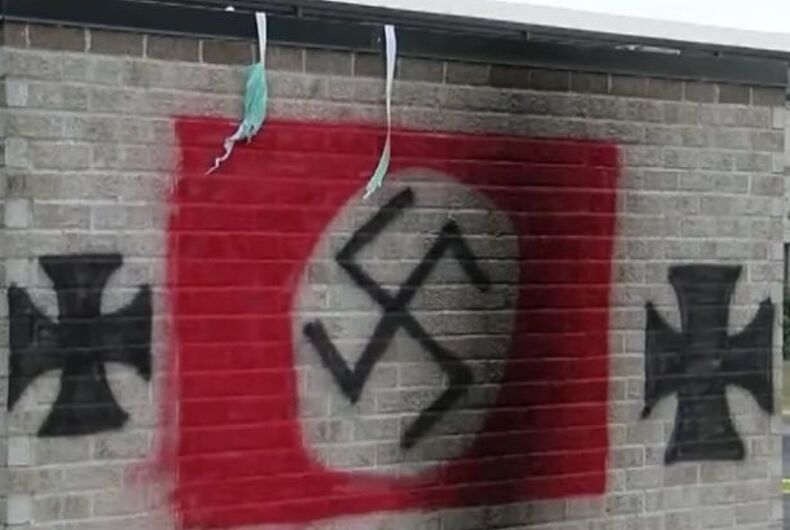 Someone painted Nazi symbols on a garbage bin shed at Congregation Shaarey Tefilla in Carmel, Indiana. It cannot be prosecuted as a hate crime because the state has no hate crime legislation. Photo: Screenshot/YouTube

Utah’s Republican governor signed a hate crimes bill that made their previous, “unworkable” law better, while the Indiana legislature passed a bill that civil rights groups say doesn’t even count as a hate crimes law.

Yesterday, Utah Governor Gary Herbert signed a bill that would put stiffer penalties on hate crimes based on a number of characteristics, including sexual orientation and gender identity.

“We are sending a message that everybody, every person, every individual in our society is worthy of dignity, respect and love,” Herbert said.

Several Republicans have been trying to pass the law for years. Former Utah Senator Steve Urquhart (R), who tried to pass the bill, said that it took a lot of convincing.

The state’s previous hate crimes bill, which was enacted in 1992, was considered unenforceable by prosecutors. The law tracked statistics on hate crimes but only allowed for enhanced sentences for misdemeanors, not felonies.

“The statute that we have is such an untenable and unworkable statute that we have not had a successful prosecution of a hate crime for the last 20 years at the state level,” Salt Lake County attorney Sim Gill told the New York Times. “It is worthless. It is not worth the paper it is written on.”

Indiana Republicans, though, have passed what civil rights groups believe is another worthless hate crimes bill.

Instead, the law defines a hate crime as a crime motivated by bias against any “real or perceived characteristic, trait, belief, practice, association, or other attribute the court chooses to consider.” Judges will have discretion to determine whether, for example, being transgender qualifies as such a characteristic.

Indiana Republicans are defending their unique hate crimes bill by saying that it covers everyone.

“You cannot name a characteristic or trait not covered under this bill. We believe this is the most comprehensive and inclusive bias crimes statute in the nation,” said House Speaker Brian Bosma (R).

“The reference to our current bias crime definition meets or exceeds that of 21 other states’ bias crime statutes, and all of those states are off the list of states without a bias crimes law. There’s no reasonable assertion as to why this all-inclusive measure doesn’t take Indiana off the list.”

But Democrats said that the reason the bill lists no categories is because Republicans refused to support a bill that mentioned gender identity.

“We can’t get a bill passed that has gender identity in it, let’s just be honest about it,” said Senate Democratic Leader Tim Lanane (D).

The anti-LGBTQ Indiana Family Institute supported removing all the categories from the bill, saying that they would make some people “more equal” than others.

“Could this list become a proxy for the list of preferred or targeted citizens the Senate avoided and the House claims to have eschewed?” said Curt Smith, the president of the Indiana Family Institute.

Indiana is one of five states that doesn’t currently have hate crimes legislation. The Anti-Defamation League said that it was “deeply disappointed” with the bill.

The law “does not meet our standard for a real and effective hate crimes bill in 2019,” the group said in a statement.

Since no other state has passed a hate crimes bill with no categories, how it will be used by prosecutors or interpreted by judges is unknown.

HRC has urged Holcomb not to sign the law.

“HRC will not support any proposal that is not fully-inclusive of the LGBTQ community and our allies, full stop,” HRC’s JoDee Winterhof said in a statement.

Even though few people believe that there is an epidemic of crimes committed because of bias against a person’s alma mater or against Trump supporters, conservative lawmakers in Utah may have the same problem as conservatives in Indiana when it comes to acknowledging that there is systemic bias based on certain characteristics that materially affects how people who aren’t like them live.

Is Congress about to hold hearings on controversy over Truvada patent?