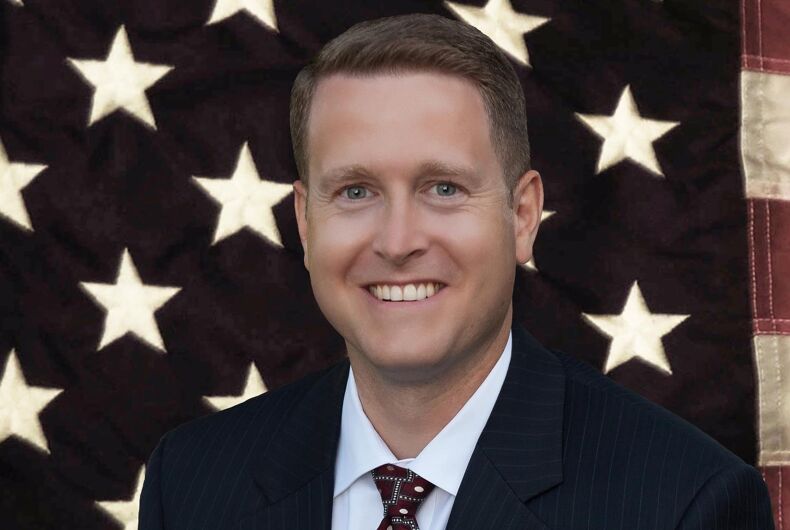 Matt Shea, a Republican state lawmaker in Washington, has been busted planning domestic terror attacks on his political opponents according to the Guardian.

Earlier this year, Shea issued a manifesto calling for the execution of men who don’t follow “Biblical law.” (He meant gay people.)

Shea had chat conversations with multiple rightwing extremists about carrying out “psyops,” surveillance, and violent attacks on perceived opponents. He specifically offered to run background checks on his political enemies to help his conspirators target them more easily.

The far right Republican did not deny sending the messages, but instead described the article detailing his involvement as “a hit piece.” Instead, he defended his offer to perform background checks, saying he was receiving threats at the time.

Shea did not offer to perform checks on people he felt were threatening his family, according to chat logs published by the Guardian. He asked for a list of names from the other participants. The list included a local organizer and a college professor.

Other messages in the group include calls for violently attacking Antifa and leftwing protestors, showing up at their homes and their children’s schools, as well as other forms of intimidation.

One of the other men in the chat vividly described what he wanted to do to a woman targeted for a background check by Shea.

“Fist full of hair, and face slam, to a Jersey barrier,” Jack Robertson, the host of a far right radio show, sent. “Treat em like communist revolutionaries. Then shave her bald with a K-Bar USMC field knife.”

House Democratic leaders called on the state party to eject Shea from the Republican caucus and Governor Jay Inslee tweeted his own condemnation of the extremist.

There is no place for hate in Washington state, especially in Washington’s Legislature. Rep. Matt Shea’s history of hate has now crossed a new line. He participated in conversations that advocated for violence against those with dissenting opinions,” Inslee tweeted.

“Rep. Shea embodies a strain of extreme ideology that, throughout the decades and into the present, has caused deep harm to people and families. He is actively conspiring with others to surveil and target political activists. I strongly condemn both his rhetoric and his behavior.”

“To Governor Inslee, I do not take seriously an admonition against violence from someone who routinely fails to condemn Antifa acts of terrorism in this state and the barbaric rhetoric aimed at our President on the one hand while supporting the systematic murder of babies in the womb on the other,” Shea replied to Inslee on Facebook.

Rep. Shea embodies a strain of extreme ideology that, throughout the decades and into the present, has caused deep harm to people and families. He is actively conspiring with others to surveil and target political activists. I strongly condemn both his rhetoric and his behavior.

KEEPING UP THE FIGHT DESPITE THE FALSE ACCUSATIONS:The Guardian article is an extremely misleading hit-piece from an…

Should felons in prison have the right to vote? Let’s look at America’s history on voting rights.