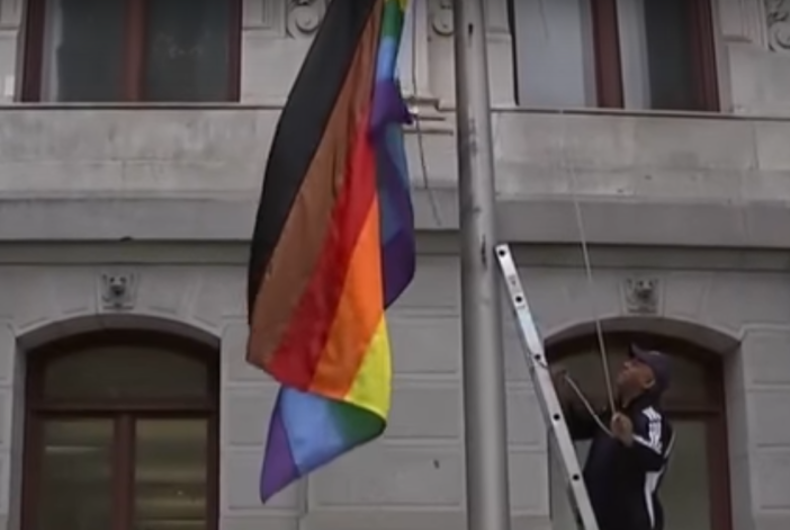 Philadelphia added two stripes to some rainbow flags in 2016 to honor queer people of color.Photo: YouTube

Pride organizers in a city in Canada have canceled this year’s parade, citing “the current political and social environment.”

The parade was scheduled for this coming June as part of the city’s ten-day Pride festivities, but the Edmonton Pride Festival Society (EPFS) board just announced in an email that the parade has been canceled.

“Please keep in mind that we are a not-for-profit organization run almost solely by volunteers,” the email stated.

“It has been the goal of the Edmonton Pride Festival Society to host a safe and enjoyable event that is as reflective and encompassing of the entire community as possible; however, given current events, we do not feel that this is attainable this year.”

Related: Has Pride become polarizing inside the LGBTQ community?

Last year, the Pride parade in Edmonton was held up for half an hour by people who were protesting against the presence of uniformed police officers and military personnel.

The organizations also demanded that EPFS reorganize pride as a protest, include a set of workshops with vendors outside of the area, and hold a vigil.

The meeting, though, accomplished little. About 30 people from Shades of Colour and RaricaNow showed up, but they were told that they couldn’t enter because they weren’t members of EPFS.

According to Clayton Hitchcock, co-chair of the Pride Festival Society, the people pushed their way into the meeting, and someone called the police.

V. Guzman of Shades of Colour told CBC that no one was arrested.

“Whoever called the police — I don’t know who it is — I don’t think they understood the systemic issues that we were bringing up within our demands,” they said. “I remember yelling at them, ‘You do not understand the repercussions of your actions and what you just did to our community.'”

“I’m certainly disappointed that this is the solution that’s been reached for now,” said Rob Browatzke, co-owner of the Evolution Wonderlounge in Edmonton.

“I’m hoping that, maybe, the email will be a call to action for members of the community to come out, make the necessary changes, have the necessary conversations to get Pride onboard.”

“I was very shocked and taken aback by the notice that the Pride Festival decided to cancel. My immediate feeling that came after that was fear, fear for the negative backlash,” Guzman said. “Now I’m just very exhausted and sad.”

While the parade has been canceled, other Pride events are still going forward.

“Losing the parade is a blow,” said Browatzke. “Losing that massive Pride in the Park party is certainly a blow. But Pride isn’t cancelled.”