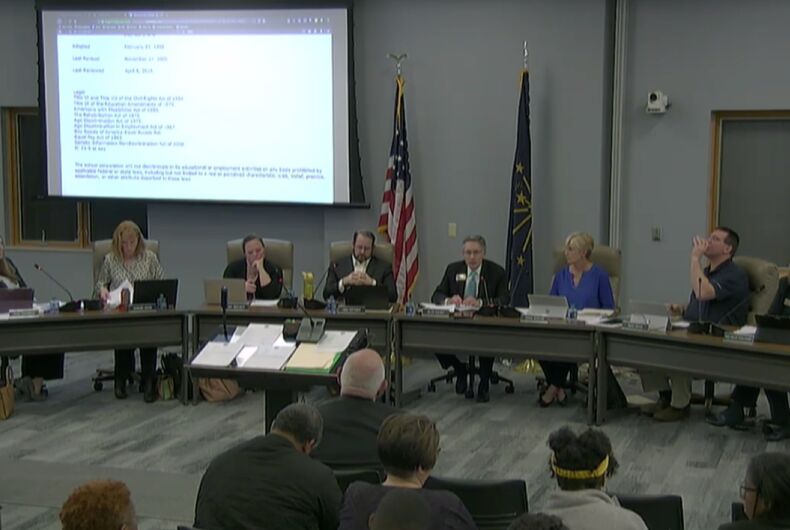 Hamilton Southeastern Schools board Vice President Sylvia Shepler made comments about trans students that were so outrageous, parents and students walked out in disgust.Photo: Screenshot/HSE

Parents and students stormed out of a school board meeting in Indiana after the board’s vice president made disgusting comments about transgender students.

The board was debating an update to the school system’s nondiscrimination policy when Vice President Sylvia Shepler offered her thoughts on the matter. She framed her comments as “some rhetorical questions” before spewing out transphobic nonsense that left some students sobbing.

The update, written by board member Julie Chambers, would have included sexual orientation and gender identity as falling under “sex.” While the current decades-old policy stipulates the school system “will not discriminate in its educational or employment activities on any basis prohibited by applicable federal or state laws,” administrators had requested an update to make the policy more current.

The updated policy would have said the district would not discriminate “in educational or employment activities based on race, sex, disability, age or religion.”

Shepler, however, insisted that proponents of the changed policy – including parents, teachers, and students – were “afraid of voicing truth” after they had spoken in favor of the update.

She claimed that “rapid onset dysphasia” is “seen in clusters” because being transgender is fashionable and teens are influenced by peers who could be trans. She also implied that children who have a mental health disorder or “other underlying issues” are the ones who experience dysphoria.

“Why wasn’t this condition acceptable in the past and is now?” she asked as the audience erupted. “It has risen to a loud level.”

“It has risen to where those individuals are being accepted and feeling more safe to be accepted and out,” another board member shot back. “And I don’t have an issue with that.”

Shepler insisted she was only asking “rhetorical questions” that didn’t need a reply before continuing her spiel.

“Could there be other influences outside of ourselves, are there ulterior motives, could we be pawns,” Shepler said before shushing a board member that tried to respond. “Why are we so afraid of voicing truth?”

“There’s a great influence of peers and the social media,” she continued. “It’s now become more and more acceptable at school. It’s popular.”

“Now it’s seen that being straight is less acceptable almost.”

The board decided to pass a policy that does not include specific categories of protected classes. By the time they voted on the measure, most people in the room had left in disgust.

Parents in a private Facebook group have organized to protest Shepler’s comments and the board decision to use a generic district-wide policy. The proposal will come up again in early May for a second hearing and they plan on showing up in force to show their support for LGBTQ students.

“I am truly concerned for the mental health of the students in attendance tonight who had to listen to a board member say horrific things about their identity and existence,” Jennifer Meyer Harmon shared. “We cannot let this stand.”

There were “students present, many of whom were sobbing. I’m very concerned about them. This was trauma.”