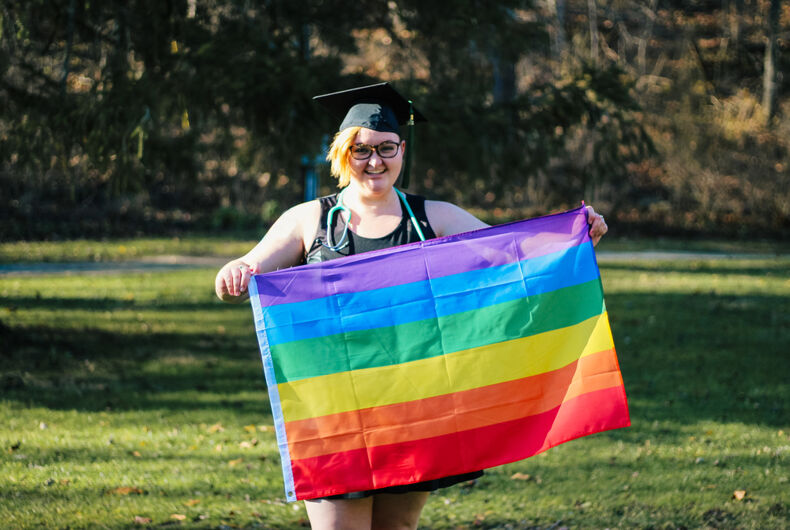 After a reported ban that left students and their parents angry, a Wyoming high school has clarified that LGBTQ-related items and rainbow flags are allowed on campus.

Officials at McCormick Junior High School in Cheyenne, Wyoming initially used the appearance of homophobic and racist flyers on campus as a reason to ban LGBTQ related clothing or materials, including pride flags.

The flyers featured a pride flag crossed with the international “no” symbol, and said “It’s great to be straight. It’s not OK to be gay.” as well as “Black lives matter only because if it weren’t for them who would pick our cotton.”

The flyer ended with “Join the kkk,” followed by, in parenthesis, “the confederate kid club.”

It was substitute teacher Kaycee Cook who first spotted the flyers and reported them to Wyoming Equality, who sponsors the GSA program at the school. The reaction from the school’s principal, Jeff Conine, was to terminate her employment.

The school also called 20-25 students out of class into a meeting with faculty where students were told they were no longer allowed to wear LGBTQ-related attire nor could they have any rainbow flags on campus.

They were also told they could not even wear clothing in or with rainbow colors.

“They told us it was a school distraction and ‘You don’t want to make other people feel like you felt when you saw the posters,'” said 8th grade student and GSA member Ashlynn Kercher to the Wyoming Tribune Eagle.

Students were told at that time that violating the policy, they would face a dress code violation, possibly leading to suspension.

Conine told the Wyoming Tribune Eagle that he had not made any decision to ban LGBTQ content on campus, and was unaware of this meeting occurring.

“It didn’t come from this administration,” said Conine.

This contradicts statements from Abby Kercher, Ashlynn Kercher’s mother, who spoke with the district’s title IX coordinator, John Balow. Kercher told the Wyoming Tribune Eagle that he and Conine made the decision together to ban LGBTQ clothing and related materials.

The school’s superintendent, Boyd Brown, has since stepped in, announcing that at least one student responsible for the initial flyers has been identified and will be disciplined for his actions.

He also intends to reinstate Kaycee Cook as a substitute teacher.

Brown also clarified the issue of rainbow flags and similar items on campus, saying that the prohibition was intended to be specific to a single day, after students had threatened to have a counter-demonstration versus students who had planned to bring confederate flags to school this Wednesday.

According to Brown, students may indeed have rainbow flags or wear LGBTQ-themed attire, provided they are not used to incite trouble with other students.

Meanwhile, confederate flags, as well as swastikas, remain banned by the school.

“We see those as a hate symbol, and we do not want them at school,” Brown said.