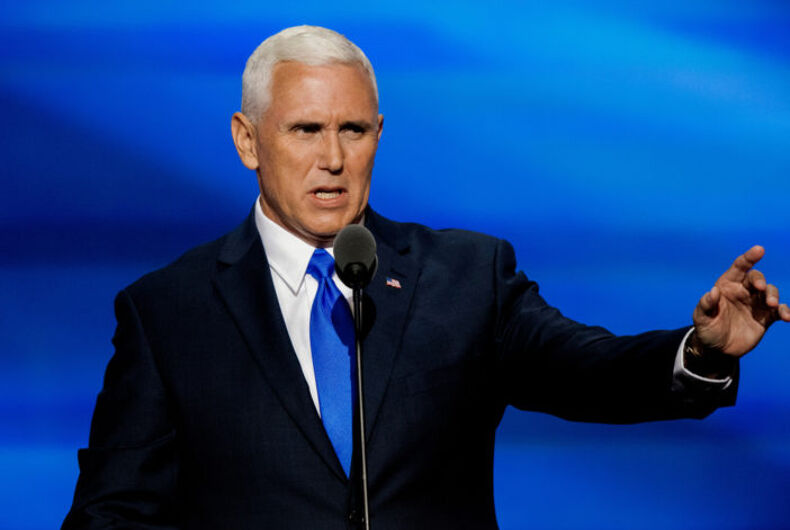 Students at a Christian college are speaking out against their school for inviting Mike Pence to speak at their commencement.

Taylor University, a nondenominational Christian college in Indiana, announced on its website last week that Pence would be speaking at their commencement this coming May.

“Taylor University is honored to have Vice President Mike Pence featured as our commencement speaker,” the webpage says. “Mr. Pence has been a good friend to the University over many years, and is a Christian brother whose life and values have exemplified what we strive to instill in our graduates.”

Many students, though, disagree that Pence deserves the honor of speaking at their graduation.

The Facebook post announcing his commencement speech has received over 2800 comments so far, with students and alumni both supporting and opposing him.

“Mike Pence and the administration he represents persecute our most vulnerable people; raise up the rich, the corrupt, and the powerful; and denigrate learning,” one person wrote.

“As an alum I am more disturbed by the pushback this commencement speaker choice is getting,” wrote another. “Wow — has Taylor changed that much? I hope not! When I was there it was still ok to support Christians in public office and hold biblical values that weren’t changing with the cultural whims.”

Students opposing his speech have started a Change.org petition that has over 4200 signatures so far.

“Inviting Vice President Pence to Taylor University and giving him a coveted platform for his political views makes our alumni, faculty, staff and current students complicit in the Trump-Pence Administration’s policies, which we believe are not consistent with the Christian ethic of love we hold dear,” the petition states.

“I’m an Alumna of Taylor University (class of 2011),” wrote Jennifer Bourland, who signed the petition. “I’m disappointed that Taylor has chosen to invite Vice President Pence to speak at Commencement, as it highlights politicized rhetoric of the mainstream Evangelical church in the United States that is divisive and exclusive to minorities, including immigrants, members of the LGBTQ community, and people of color.”

“This is not consistent with the message of love that underlines the full narrative of the Gospel, including God’s call to love our neighbors and the immigrants among us.”

In 2017, over 100 students at the University of Notre Dame walked out of Mike Pence’s commencement speech.