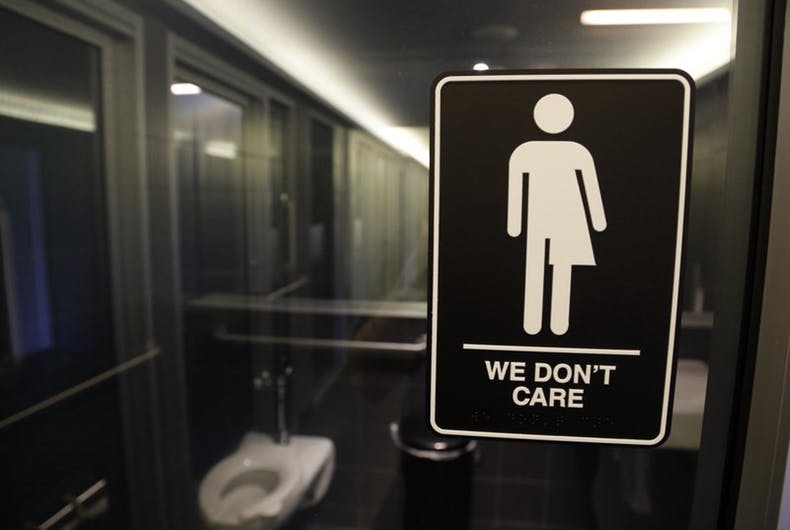 A boy in Alaska who was protesting against transgender people using the appropriate restroom was kicked in the groin by a girl. She got expelled, and some are saying that that’s an excessive punishment.

The boy was part of a group of cisgender boys at North Pole High School who got mad that a transgender boy was using the boys’ restroom.

The trans boy posted a selfie from the boys’ room to Snapchat, and the cis boys were upset by “the public nature of the post,” according to a statement released by Superintendent Karen Gaborik.

But Buzzfeed News found a screenshot of one of the cis boys’ reactions to the Snapchat picture, and his reaction shows that the boys were less concerned with privacy issues and more concerned with the trans boy’s identity.

Related: A school official tried to force a trans boy to use a urinal in front of him to ‘prove’ he’s a boy

Tomorrow identify as a women and use the women’s bathroom if you want to this shit to end, my foster dad called the school and they said they camt do anything because she identify as men so if we identify as

Women and use the girls bathroom we are set so let’s do it, don’t do it to be a asshole we are doing it to boycot this bullshit

He says he wants us to change it [sic]

Seven cis boys attempted to enter a girls’ bathroom at the school the next day. As they were walking in, a girl who was leaving the bathroom kneed one of them in the groin. The others ran away.

He was told to get medical attention, but it is not known if he did.

The girl who kneed the boy was expelled from the school. The seven boys were disciplined, although the district would not say how.

“We don’t advocate violence as a means for students to attain safety,” Gaborik told the Daily News-Miner. “If a student does use force, we have to evaluate that incident.”

“I don’t care why the boys were in the bathroom,” she said at a press conference. “I heard there was some kind of protest going on, but doesn’t matter.”

“I just wanted to make sure I had this opportunity to tell those young ladies at North Pole High School… if you ever feel threatened for your safety, whatever force you think you have to give, I will stand behind you. And so will our community.”

The girl’s sister said on Twitter that her sister “was expelled for kneeing a guy in the dick after he was blocking her in the WOMENS bathroom.”

But she said that this is the first incident that she’s aware of involving a transgender student using the bathroom at school.