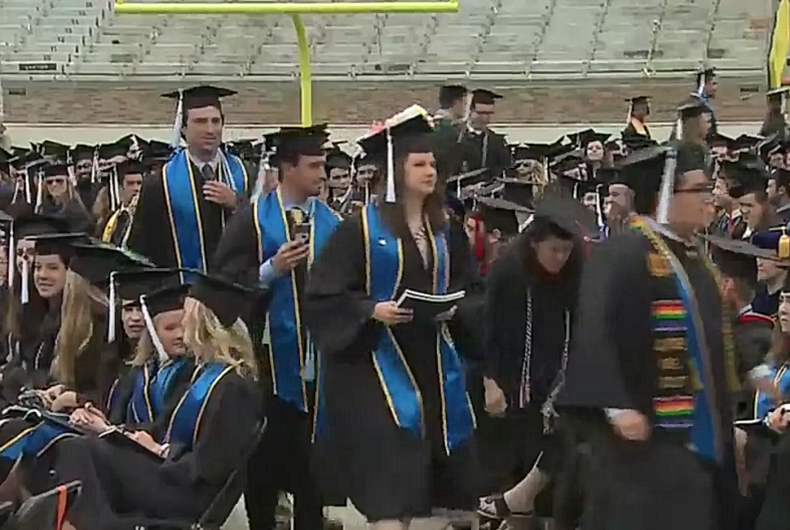 Over 100 students at the University of Notre Dame in South Bend, Indiana, walked out of a commencement speech given by Mike Pence.

In a press release, the student organization behind the protest, WeStaNDFor, explained that they were primarily motivated by Pence’s opposition to LGBTQ rights, his attempts to block Syrian refugees from entering the state when he was governor of Indiana, his role in building support for Donald Trump’s travel ban, and his hard line on immigration.

According to former student body president Bryan Ricketts, many students were “upset and hurt” by the announcement that Pence would be honored at their graduation because his “policies have impacted the humanity of certain graduates.”

Protests against Pence as a commencement speaker began in April when students distributed 500 small rainbow flags around campus, telling students to wave them from their windows to show solidarity with the protest.

As one of the protest’s organizers, Ricketts said, “The flag drop was round one. We felt after that, we should have something at graduation. Something respectful.”

The students worked with campus security to find a “respectful” way to leave the stadium. The university’s vice president for public affairs and communications, Paul Browne, told the Indianapolis Star, the school would only intervene “if the ceremony was seriously disrupted or anyone’s safety was put at risk.”

WeStaNDFor also posted instructions for exit on Facebook: “Walk away from Pence quietly, in confidence, with your head up high, taking your time. Embrace the moment, maybe even hold hands/lock arms with those joining you.”

Just before the walkout, valedictorian C.J. Pine gave a speech that discussed his experiences being raised abroad. “If we are going to build walls against American students and international students, then I am skewered on the fence,” he said, a reference to Trump and Pence’s immigrations policies.

When Pence went to speak, the protestors left the stadium. Other students booed, some cheered. After they left, Pence started his prepared remarks.

The students knew that if they left that they would not be allowed to re-enter the stadium.