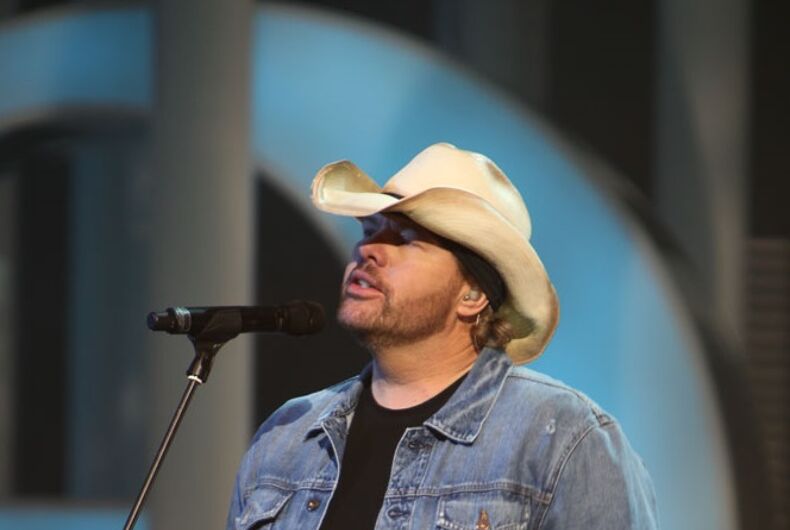 Toby Keith, singing at the Nobel Peace Prize concert in 2009, because why the hell not.Photo: Wikimedia Media Commons

Toby Keith played a concert to an all-male audience in Riyadh.

Compare that to the Beatles, who in 1964 found out that a concert they were going to play in Jacksonville, Florida, would be racially segregated: white people in one area, African American people in another.

John Lennon issued a press release saying that the band wasn’t going to play the concert unless the venue dropped its segregation policy, and it did. “We never play to segregated audiences and we aren’t going to start now. I’d sooner lose our appearance money,” Lennon said.

Keith played at a joint concert with a Saudi lute player just this weekend. From the sound of it, the Saudi audience didn’t know who Keith was but was crazy about the lute player.

In Saudi Arabia, it’s illegal for men and women who aren’t related to co-mingle, which is why the concert was single-gender. I haven’t seen a media report, though, that pointed out that “single-gender” is not synonymous with “male-only.” If it’s just about a religious rule that applies equally to men and women, then why not make it a female-only concert?

Diplomacy doesn’t require this. First, ugh, no, Saudi-American relations will not go sour if Keith doesn’t play a concert in Riyadh, that’s just ridiculous. Foreign policy has more to do with what each country sees as its own interests than it does with concerts that the leaders don’t even attend.

Also, if anyone in the audience bothers to google Keith’s lyrics….

Toby Keith is traveling with Trump to Saudi Arabia. He wrote this song about bombing Muslims: pic.twitter.com/OSziMEy9hB

Anyway, if you’ve ever had one of those annoying arguments with a rightwinger who said something like “Western women shouldn’t complain! Women in Saudia Arabia, they’re the ones who have it bad! If feminists cared about women’s rights, they would shut up about America and complain about a country they don’t live in!” then just remember this: Toby Keith, conservative star, played to an all-male audience in Saudi Arabia because of the Republican president, and all Brietbart did was post an AP article that briefly mentioned it.

Over 100 students walk out of Mike Pence’s commencement speech