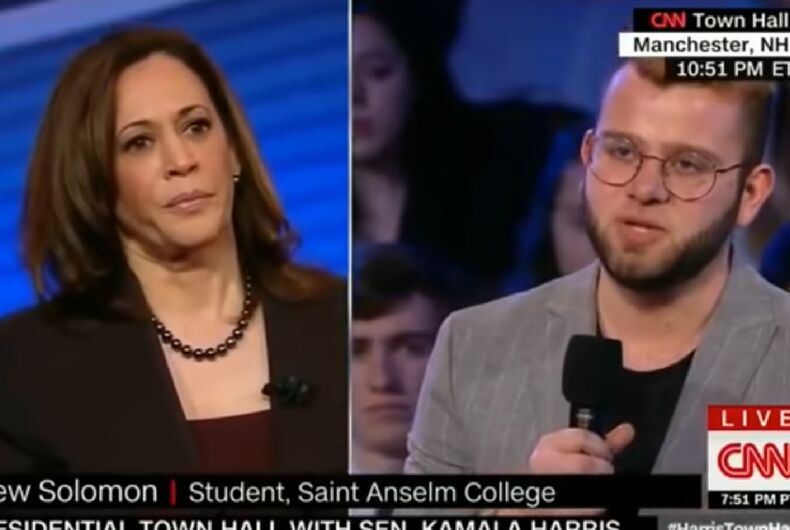 Senator Kamala Harris takes a question on LGBTQ rights from a student.Photo: CNN/Screenshot

Despite the paucity of LGBTQ-specific questions, the debate was pretty queer. Here are some of the LGBTQ moments from the 300-minute Democratic townhall.

Related: Over 20% of Sanders supporters say they’ll vote for Trump if Buttigieg or Warren win

Mayor Pete has a great clap back to a gay Republican

Buttigieg has been critical of Mike Pence, which caught the ire of Richard Grenell, the gay U.S. ambassador to Germany.

Grenell, who called Pence a “godly” person and a “follower of Christ,” said Buttigieg was making up a “hate hoax” by drawing attention to Pence’s long, long history of anti-LGBTQ views and actions.

“Mayor Pete has been pushing this hate hoax along the lines of Jussie Smollett for a very long time now, several weeks, and I find it really ironic that Mayor Pete stayed silent about this so-called hate hoax on him and others during 2015, 2016, 2017 when Mike Pence was governor,” Grenell said on Fox News.

On CNN, moderator Anderson Cooper asked Buttigieg to respond to what Grenell said.

“I’m not a master fisherman, but I know bait when I see it,” he responded. “And I’m not going to take it.”

Mayor Pete Buttigieg on dig from Trump official: I know bait when I see it

Buttigieg refused to engage when asked about a Trump admin. official who accused him of pushing a "hate hoax" during his back-and-forth with VP Mike Pence https://t.co/qDjMO1a1Fn #ButtigiegTownHall pic.twitter.com/wggYBDARTk

Kamala Harris might have mixed up trans men and women

One of the few LGBTQ questions of the night went to Harris, who was asked by the president of Saint Anselm College’s LGBTQ Alliance what she would do to provide protections to LGBTQ people, and specifically transgender people and queer people of color.

Her answer started well – she immediately touted her support for the Equality Act.

“I, on day one, would pass the Equality Act to make sure that we actually correct what is wrong and give LGBTQ people equal rights under the law,” she said. “This is a civil rights and a human rights issue and we must address it.”

Harris then discussed her record as California attorney general and refusing to defend the state’s marriage equality ban and officiating marriages for same-sex couples.

Then she slipped up.

“You’ll remember the tragic cases involving transgender men who were killed and there was this defense that was happening in court where the murderer was calling it the ‘gay panic defense,'” Harris said. “‘Oh, I panicked because I didn’t know he was gay and therefore I should not be convicted of murder.’ And this was happening around the Matthew Shepard case, around that era.”

I don’t know if there a more hysterically embarrassing way for Kamala Harris to demonstrate how insincere her investment in trans/nb rights is than mixing up trans women with trans men at a live CNN town hall.

She went on to talk about her work fighting the gay and transgender panic defenses and then stated her opposition to the transgender military ban.

“We’ve got a president who is putting in place a process for discharging transgender men and women who have made a commitment to our country to defend our democracy,” she said.

“That is something that I would reverse immediately when I’m elected president of the United States.”

Buttigieg got asked how he would work with countries that want to kill LGBTQ people.

A student asked Buttigieg, “How would you cooperate with countries that view homosexuality as a sin and a crime that is punishable by death?”

He started his response by repudiating countries that punish people for being LGBTQ.

“I think it’s wrong to harm or punish people because they’re part of the LGBTQ community,” he said. “In some respects, our country is not there.”

He then went on to talk about American human rights credibility in general.

Mayor Pete talks about why he came out.

Anderson Cooper asked what he called “a personal question”: would Buttigieg’s life have been different if he had come out earlier?

“I came out because I wanted to date,” he responded, getting laughs from the crowd.

“If dating had been available to me in my 20s I’m not sure I’d have gotten nearly as much done.”

“At first I convinced myself that I didn’t need much else in my life because I had a really demanding job,” he said, referring to being mayor and in the Navy Reserve.

But after being deployed to Afghanistan, he said he realized, “You only get to live one life. And I came out. And I started dating. And I found Chasten.”

“And I don’t know how I’d do this without him.”

Two of the moderators were gay.

There were three moderators for the townhalls. Two of them – Anderson Cooper and Don Lemon – are gay.

Was thrilled to be able to one-on-one, sit down interview @AndersonCooper and @DonLemon in New Hampshire tonight! As a young gay journalist, I am grateful for the path they have paved. #CNNTownHall

Chasten Buttigieg let America know what the snacks were in the green room.

South Bend’s First Gentleman, during the townhalls, took the time to answer America’s burning question: what snacks are available in CNN’s green room?

It looks like a lot of Clif Bars but only Pepsi products.

Update from the green room: I don’t know if @CNN has been reading my journal, but our diet consists of about 80% Clif Bars right now. I just want a salad. (But thank you for the food!) pic.twitter.com/CDDk29HRrA