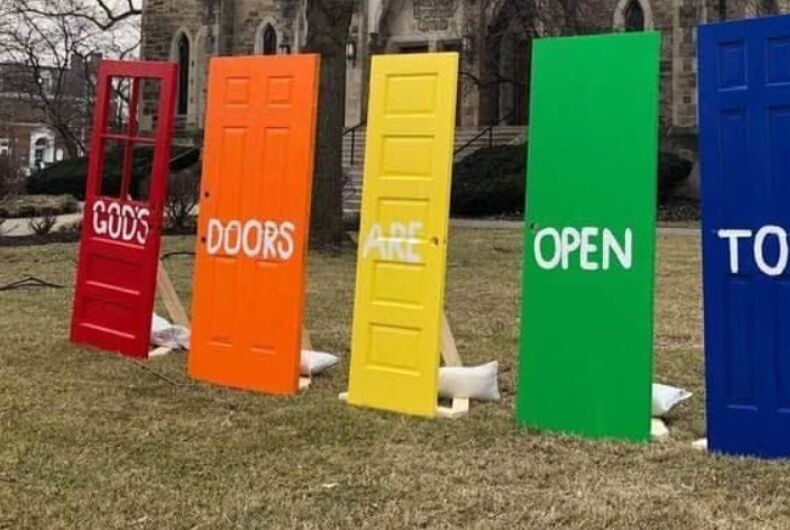 For decades there has been an ongoing struggle in the United Methodist Church (UMC) to adopt a policy of full inclusion of its LGBTQ parishioners and clergy and all the spiritual gifts we bring to the church.

However, the UMC’s General Conference last month voted to uphold – 53% to 47% – its Traditionalist Plan, which opposes same-sex marriage and the ordination of LGBTQ clergy. Now the church has the potential for a schism with its global delegation.

In the hopes of avoiding a schism, the Council of Bishops had recommended the One Church Plan that would grant individual ministers and regional church bodies the decision to ordain LGBTQs as clergy and to perform LGBTQ weddings.

They believed that deciding on a church-by-church and regional basis would reflect the diversity as well as affirm the different churches and cultures throughout the global body of UMC.

The One Church Plan, however, was one of three proposed plans by the UMC’s Commission on a Way Forward. The others include the Traditionalist Plan and the Connectional Conference Plan, both exclusionary to LGBTQ parishioners.

The One Church Plan would excise the offensive and controversial language targeted at LGBTQs from the Book of Discipline and replace it with a more compassionate, accurate, up-to-date, and contextualized language about human sexuality in support of the mission and all its parishioners.

Also, the One Church Plan would uphold religious freedom and thereby safeguard those clerics and conferences unwilling to ordain or marry us because of their theological convictions.

However, the UMC continues to be contradictory in its policies concerning LGBTQ worshippers, and the church’s contentious views reared their ugly head at the 2016 meeting of global delegates.

For example, the UMC states that we have and are of the same sacred worth as heterosexuals, and that the church is committed to the ministry of all people regardless of gender identities and sexual orientations. However, the church also views queer sexualities as sinful.

The Book of Discipline states that sexuality is “God’s good gift to all persons” and that people are “fully human only when their sexuality is acknowledged and affirmed by themselves, the church, and society.”

However, this rule is not applicable to LGBTQs.

The UMC’s history of struggle on this issue clearly illustrates the defiant will for LGBTQ inclusion, and churches in Massachusetts have always led the way.

For example, in last Sunday’s Boston Globe nearly three dozen United Methodist churches across the Commonwealth took out a half-page ad affirming their belief “in the sacredness of all.”

The advocacy Massachusetts churches have shown for decades.

In the 1990s, the Union United Methodist Church (UUMC), a predominately African American congregation located in Boston’s South End — once the epicenter of the city’s LGBTQ community — is one of them. And it is the one institution least expected to be lauded among LGBTQ people of African descent because of the Black Church’s notorious history of homophobia.

When its pastor came out at General Conference in 2016 to move the global church body’s moral compass against its anti-LGBTQ policies, UUMC was in full support.

Since June 2011, more than 100 Methodist ministers in New England have pledged to marry LGBTQ couples in defiance of the denomination’s ban on same-sex unions.

Approximately one out of nine Methodist clerics signed a statement pledging to open their churches to LGBTQ couples that stated, “We repent that it has taken us so long to act… We realize that our church’s discriminatory policies tarnish the witness of the church to the world, and we are [complicit].’’

In 2013, the Reverend Frank Schaefer, pastor at Zion United Methodist Church of Iona in Pennsylvania, was forced to stand trial for officiating his son’s 2007 same-sex nuptials.

“I love him so much and didn’t want to deny him that joy. I had to follow my heart,” Schaefer told the New York Daily News.

The Eastern Pennsylvania Conference of the Methodist Church, however, wanted to drill home to Schaefer and his allies that he — irrespective of familial love or Christian belief — blatantly and willfully violated the church’s law book, the Book of Discipline, prohibiting same-sex marriages.

UMC’s decision to oppose same-sex marriage and the ordination of LGBTQ clergy is both wrong-headed and wrong-hearted.

As LGBTQ people we must know that this religious intolerance and spiritual abuse are antithetical to the social gospel of Jesus Christ: that all people under God have the same sacred worth — even if the United Methodist Church doesn’t practice it.