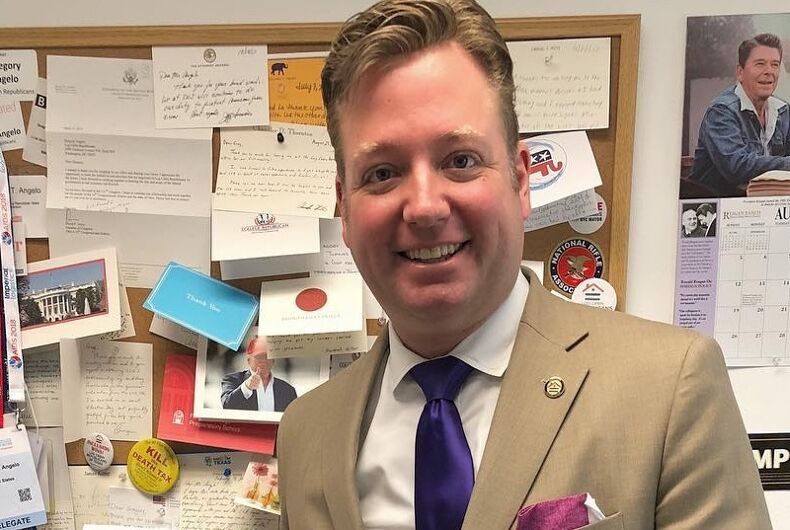 Former Log Cabin Republicans president Gregory Angelo has come out against the Equality Act, the proposed legislation to ban discrimination against LGBTQ people.

Angelo says the bill “would flout bedrock principles that have served as the foundation of the American experience for centuries” and impinge on American’s “religious freedom” to discriminate against LGBTQ people.

“Don’t be fooled by the name,” Angelo writes in the rightwing Washington Examiner. “The Equality Act is legislation that would compromise American civil rights and religious liberty as we know it. All reasonable Americans, especially gay Americans who support pluralism and tolerance, should oppose it.”

A majority of Americans – including evangelical Christians – support a federal law to prevent discrimination. Angelo acknowledges this in his op-ed, but dismisses it because “sensible people will find that this is bad legislation that will set back the cause of true equality, perhaps by decades.”

Angelo supposedly lobbied Congress and the White House on behalf of LGBTQ people to pass similar legislation while he led Log Cabin Republicans. While the group condemned bakers, florists, and the like who refuse to serve LGBTQ couples under his watch, now Angelo is worried that “private businesses whose owners held beliefs that prevented them from participating in same-sex wedding celebrations would be forced to do so or close their doors.”

“In the run-up to the United States Supreme Court marriage equality decisions of 2013 and 2015, gay advocates such as myself promised those we disagreed with that allowing same-sex couples to marry would have no effect on them, their families, or their faith,” Angelo writes

“Passage of the ‘Equality Act’ would make liars out of the lot of us. It would put the nonprofit status of religious charities at risk; it would force mom-and-pop businesses to participate in same-sex marriage ceremonies; and it would flout bedrock principles that have served as the foundation of the American experience for centuries.”

All but two Democrats have come out in favor of the Equality Act, it was endorsed by former President Barack Obama, and has unprecedented support from the business community.

And that support is why the law isn’t needed now, Angelo falsely asserts.

“In 1975, when it was first introduced in Congress, this legislation was certainly more needed and relevant. At the time, gay Americans faced prejudice at a far more pervasive rate than they do today,” Angelo writes. “In the 44 years since, without any federal legislative coercion, corporate America has taken the lead, developing organic policies that respect lesbian, gay, bisexual, and transgender employees. This is the free market at work in all its glory, and it offers a far more promising path than this flawed legislation.”

And yet, frequent claims of employment discrimination are lodged against… businesses who haven’t “taken the lead” and still demand they have a religious license to discriminate.