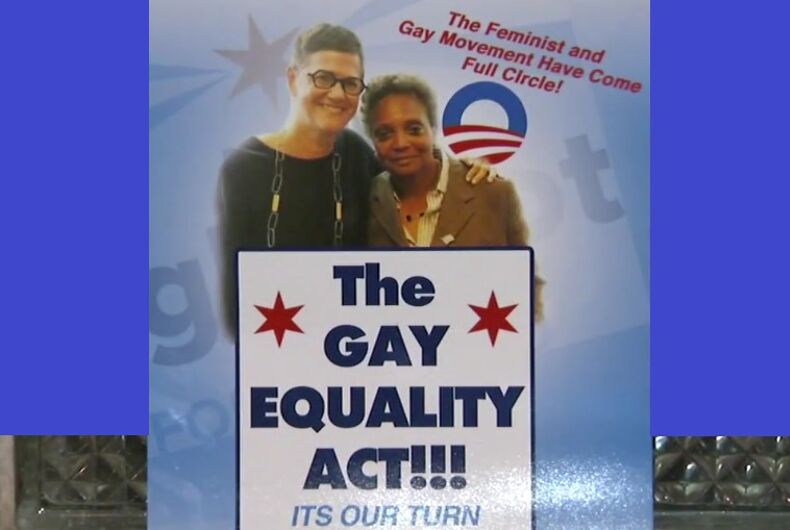 Anti-gay flyers were handed out at churches to attack a lesbian mayoral candidate.

The flyers were distributed at at least two black churches in Chicago and featured a picture of Lori Lightfoot and her wife.

Above their picture, the flyer says, “The Feminist and Gay Movement Have Come Full Circle” and tout “The GAY EQUALITY ACT!!!” in big letters.

On the backside, the flyer says that all “contracts, jobs and employment” will be given “exclusively to gay people.”

Appearing to quote her, the flyer says, “With our people in City Hall, I promise to enforce the Gay Equality Act,” and lists various parts of the fictional law: all churches will be forced to perform same-sex marriages, public restrooms will be “gender free,” and public schools will have to teach “Gay History.”

Related: Gay candidate’s kiss with his husband in political ad is nation’s first

There is also a screenshot of a headline from the Washington Blade about the Equality Act, although that headline is referring to federal anti-discrimination legislation that has yet to pass.

“We’ll have more to say about this in the coming days. But simply put, hate has no place in Chicago,” Lightfoot said at a press conference where she announced several union endorsements.

“Particularly in the context of a horrible terrorist event in Christchurch, the fear that has struck in the Muslim community here — any attempts by anyone to propagate hate, we have to stand together as a city and denounce it unequivocally because hate can have no place in our city.”

Her opponent, Toni Preckwinkle, called the flyers “disgraceful” and said, “They have nothing to do with our campaign.”