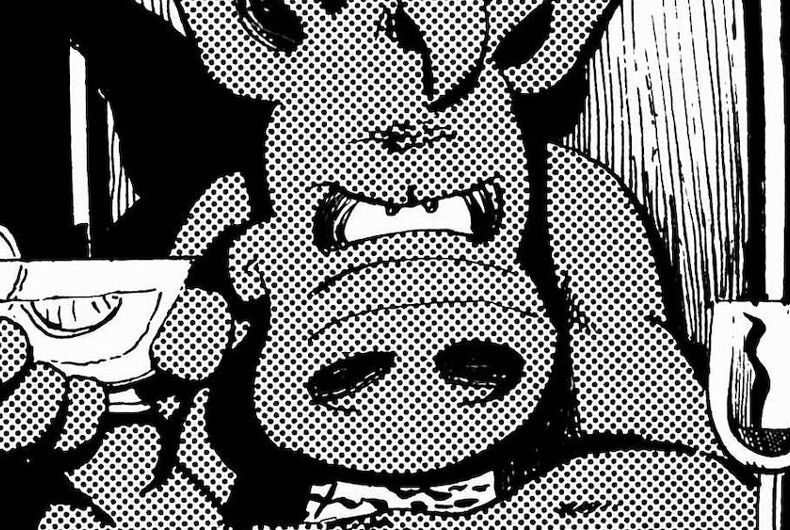 MEET THE INFERNAL REALMS’ MOST INCLUSIVE SUPER GROUP! LESBIANA HOMBRE™! Gay Chicano Female trapped inside the White Masculine body she never made! REDWOOD CITY™! He may look like a tree, but he’s actually a mid-sized metropolitan California tourist destination (and excretes his own pine cones!) BORDERLINE BOBBIEY™! Amazingly, he changes gender identity every time you refer to her by a different pronoun! Just watch him! You go, girl! BELVEDERE™! Tired of being a stallion centaur Belvedere demands her right to give birth as a broodmare! “No WOMB! No PEACE!”

Watch, as the STRANGEST HEROES AND FEMALE HEROES OF ALL go head-to-head with Cerebus! Can the aardvark and his WAVERY HOMOPHOBIA LINES hold up against a SUPREME COURT DECISION!? Features the hit song “Don’t Pine for your cone, Redwood City!”

In the past, Sim has been a vocal advocate for independent comics creators and praised for pushing the genre and exploring theological themes.

However, in the past he has disavowed transgender identity as “an abnormal psychological pathology,” adding “I, and most men I know, remain unconvinced [about trans identity] despite the massive pressure you exert to try and make us see it your way.”

“Dave seems to have brought a few attitudes from the 19th century with him,” Rich Johnston of Bleeding Cool writes.

The comic is set to hit stores in June, Pride Month. Johnston notes that Cerebus has seen steadily declining sales of late, coinciding with Sim’s increasing use of sensationalized and provocative political cover art. Johnston also pointed out a handful of disappointed fans on Twitter decrying Sim’s upcoming issue.

Here is the cover art for the Cerebus LGBTQ issue:

A court shut down this ex-gay conversion group in 2015, but it’s still operating under a new name