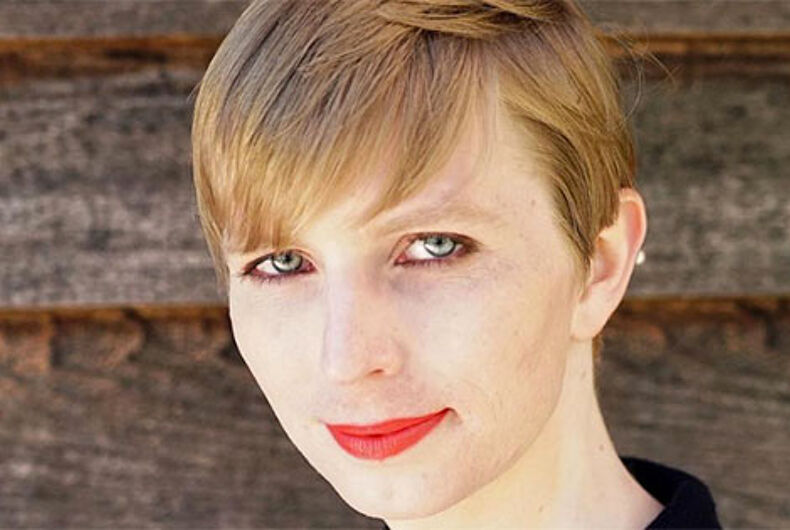 Chelsea Manning, the former Army intelligence analyst who went to prison for leaking secret documents to WikiLeaks, is back in jail after refusing to answer questions in front of a grand jury in Virginia.

Manning, who transitioned while incarcerated, was subpoenaed to appear before a federal grand jury to disclose information about her connection and communication with WikiLeaks founder Julian Assange.

The federal government punished Manning for whistleblowing on illegal military killings in the Middle East by handing her the harshest punishment ever given for leaking documents. While the government supposedly encourages employees and military members to report unethical and illegal behavior, they pursued her with a vendetta and court-martialed her.

She was regularly mistreated while incarcerated, spawning multiple lawsuits and formal complaints.

Related: What do Chelsea Manning & Sean Spicer have in common?

Manning, who obviously has no faith left in the American government, fought the subpoena, trying to have it quashed. A federal judge refused the request, but Manning refused to testify, citing her Constitutional rights.

“Yesterday I appeared before a secret grand jury after being given immunity for my testimony. All of the substantive questions pertained to my disclosures of information to the public in 2010 – answers I provided in extensive testimony during my court-martial in 2013,” Manning said in a prepared statement.

“I responded to each question with the following statement, ‘I object to the question and refuse to answer on the grounds that the question is in violation of my First, Fourth, and Sixth Amendment, and other statutory rights’.”

Unlike normal judicial proceedings, anyone called in front of a grand jury cannot have legal representation present in the room when they answer questions.

“Grand juries operate in secret, allowing the government to retaliate against activists and dissidents behind closed doors,” a statement released by her lawyers after the court hearing read.

“Donald Trump and his administration have publicly declared their disdain for Chelsea, and for President Obama’s decision to commute her sentence. Chelsea has stood by the testimony from her 2013 court-martial, and this subpoena serves no legitimate purpose. It is a punitive effort to reverse Obama’s legacy, exposing Chelsea to legal hardship and possible imprisonment.”

Manning will be imprisoned until she either answers the questions or the grand jury is dismissed.

New statement from Chelsea Manning — she has refused to testify before grand jury. Another closed hearing is set for tomorrow am. "The court may find me in contempt, and order me to jail," she says in statement.