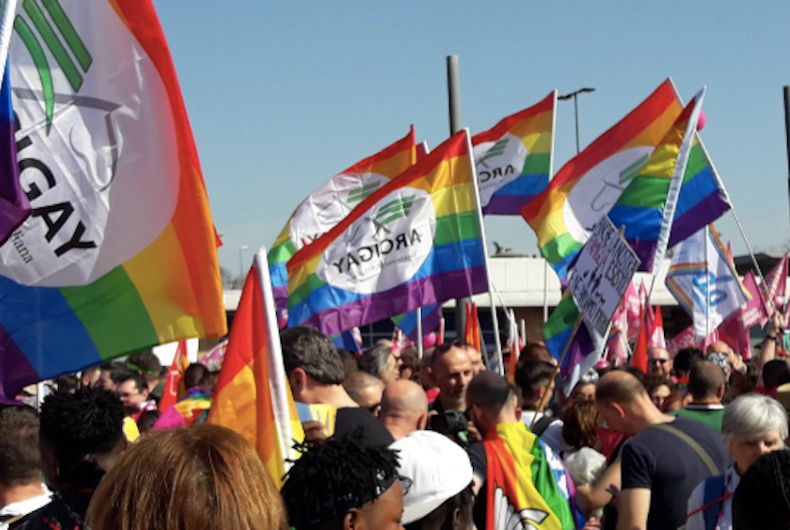 Yesterday, over 20,000 protestors in Verona, Italy demonstrated outside of a conference of the World Congress of Families (WCF), a U.S.-based, far-right Christian coalition that pursues anti-gay, anti-abortion and anti-feminist policies worldwide.

The Guardian reports that over 70 civil rights organizations from across the country organized the protest. Protestors came from all over Europe including Britain, Croatia, Germany, Poland and Switzerland.

Yahoo News writes, “Many sang ‘Bella Ciao’, an anthem of the Italian resistance during WWII, and banners carried slogans including, ‘Our bodies and our desires, it’s we who decide.’

The WCF has been labelled a hate group by the Southern Poverty Law Center. The group, which has been in operation since 1997, promotes anti-LGBT rhetoric and legislation abroad, including in Russia and several African countries. Among its policy positions, the WCF supports conversion therapy, laws criminalizing sodomy and religious rights freedom amendments that allow Christians to discriminate against LGBTQ people.

Luisa Rizzitelli, a spokesperson for Rebel Network, a women’s group, told The Guardian, “This is a battle to protect the rights and freedom for all, not just one group. We’re all under threat. This congress is not about religion but political power, and we don’t accept this dangerous regression.”

She added, “The only positive thing to come out of this event is that all these groups have come together and Italy is uniting.”

The Guardian provides a list of some of the WCF attendees:

Other speakers have included Brian Brown, the WCF president, who fought against same-sex marriage in the US; Theresa Okafor, a Nigerian activist who likened gay people to the Boko Haram terrorist group; and Lucy Akello, a Ugandan politician who helped pass an anti-gay law that sets life imprisonment as the maximum penalty for homosexuality in Uganda. Among the delegates were Russian Orthodox and Mormon leaders as well as Katalin Novák, the Hungarian minister for family affairs.

Five years ago, the Human Rights Campaign released an in-depth report about the WCF’s international dealings. It’s worth reading.

Commemorate the Trans Day of Visibility with these 5 excellent films

This dating app for queer women just exposed the data of its 5.3 million users