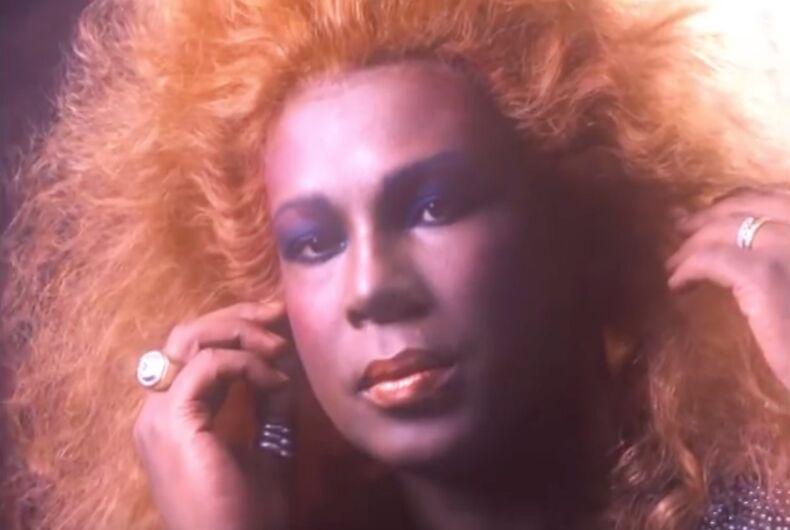 As stars go, they don’t come much bigger or shine much brighter than Sylvester.

Born Sylvester James Jr, in Los Angeles in 1947, he grew up in a religious household. The family attended the Pentecostal Palm Lane Church of God in Christ in Los Angeles, where young Sylvester developed his love of music singing in the church’s choir.

News of Sylvester’s same-sex activity spread throughout the church. Feeling unwelcome and persecuted due to his sexuality, he stopped attending church at age 15. He left home in his teens due to a dysfunctional relationship with his mother and step-father because of their inability to accept his sexuality.

Now homeless, young Sylvester spent a great deal of time with his grandmother, Julia Morgan, who enjoyed some success as a blues singer in the 1920s and 30s. Unlike his mother, she was accepting of his sexuality and was said to have had a great many gay male friends.

A group of black crossdressers and trans women known as the Disquotays soon befriended Sylvester. Wandering the town decked out in feminine attire, and known for throwing spectacular house parties with guests like legendary singer Etta James, they were a significant influence on Sylvester.

When Sylvester graduated from high school at age 21, he donned blue chiffon gown and a beehive hairstyle instead of the usual cap and gown. The Disquotays disbanded and Sylvester, bored with life in Los Angeles, moved to San Francisco and joined the drag group the Cockettes.

Sylvester eventually began producing his own shows, heavily influenced by (bisexual) female blues singers like Josephine Baker and Billie Holiday. He left the Cockettes in the midst of their tour of New York City to pursue a solo career.

Back in San Francisco, Sylvester performed as a solo act at the San Francisco supper club Bimbo’s. In 1972, he appeared at The Temple with the then-unknown Pointer Sisters. Defiant and unapologetically gay, critics sometimes described him as a drag queen, a description Sylvester rejected.

”I am Sylvester, ” he said, refusing to be categorized.

Sylvester’s second solo album, ”Step II, ” launched the disco classics ”You Make Me Feel (Mighty Real)” and ”Disco Heat” into the world. The two songs spent six weeks at #1 on the American dance charts in August and September of 1978.

Both Sylvester’s recordings and live shows featured the backing vocals of Martha Wash and Izora Rhodes, who would become famous in their own right as The Weather Girls.

By 1983, Sylvester moved to Megatone Records, where he recorded his classic hit ”Do Ya Wanna Funk, ” which was featured in the film Trading Places. Along with his solo work, Sylvester recorded backing vocals for some of his favorite singers, such as Patti La Belle and Aretha Franklin.

Sylvester switched to Warner Brothers Records, and in 1986 released his solo disc for the label, ”Mutual Attraction.” The track ”Someone Like You” became his third #1 on the dance charts and featured cover art by Keith Haring.

In 1986, Sylvester’s partner, Rick Cranmer, realized he was infected with HIV. His health deteriorated rapidly, and he died in 1987.

Devastated, Sylvester realized he was probably infected too, but refused to have his blood tested. He developed a persistent cough while beginning to work on a new album that would remain unfinished. He tried to continue performing until he became too sick to undertake a full tour.

Sylvester returned home after being hospitalized for sinus surgery in 1987 and began giving away treasured items and writing his will. By 1988, he’d lost weight and was unable to walk far.

He was pushed in a wheelchair in the Gay Freedom Parade through the Castro, in front of the People with AIDS contingent. The Castro Street Fair was named A Tribute to Sylvester in his honor, though he was too ill to attend.

Sylvester died on December 16, 1988, at age 41. For his funeral, he was laid out in an open-top casket, dressed in a red kimono. The event was standing room only.

Sylvester lives on through his musical legacy. In 2005, he was inducted into the Dance Music Hall of Fame, and the biography The Fabulous Sylvester was published. The television series Unsung produced an episode on Sylvester in 2011. Four years later, he was the subject of the off-Broadway musical Mighty Real: A Fabulous Sylvester Musical, at the Theatre at St. Clements.

Editor’s Note: This story has been corrected to reflect that the Disquotays were a group of crossdressers and trans women and not gay men.