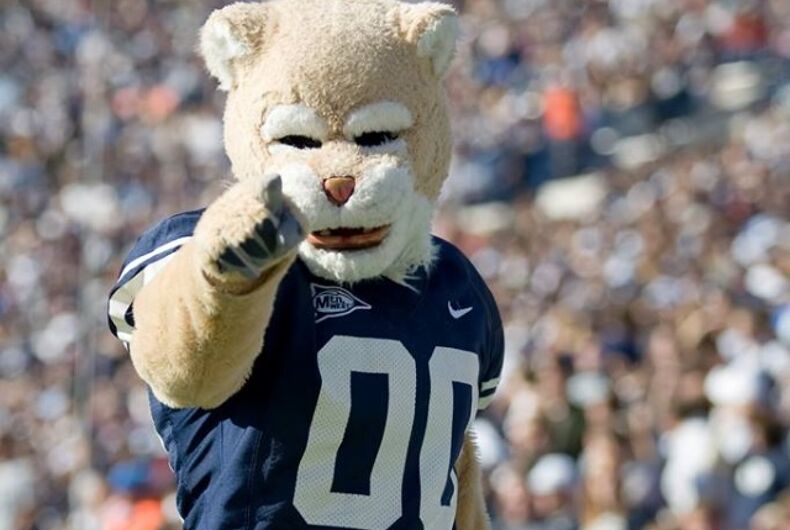 The man behind Brigham Young University’s Cosmo the Cougar came out in a deeply personal article in the Deseret News, sharing stories of the joy he had as a popular sports mascot – and his fear of rejection if people knew he was gay.

“As Cosmo the Cougar at Brigham Young University, I kept the best part of my life a secret from everyone around me by wearing a mask,” writes Charlie Bird, a recent graduate of BYU, and the former mascot of the university’s athletic program.

“I traveled the country, performed for millions of people, took pictures with screaming fans, signed autographs and danced like no one was watching — even though everyone was.”

While Bird performed as Cosmo the Cougar from 2015 to 2018, the mascot became a viral sensation thanks to a dance video released in his senior year.

He performed live on the ESPN College Football Awards thanks to it and played a part in NBC Sports naming the 2017-2018 season as the “Year of the Mascot.”

That success – and the happiness Bird felt performing as Cosmo the Cougar – was tempered by a fear of being exposed.

Related: Former NFL player Michael Sam regrets coming out when he did

Said Bird, “As scary as it seemed to dance in front of 60,000 people, an even scarier thought often crept into my mind — ‘If they knew who I really was, would they hate me?'”

Brigham Young University is a privately-owned university, wholly owned by the Church of Jesus Christ of Latter-day Saints. The LDS church has taken hard stances against LGBTQ people, including sinking large amounts of money into California’s Proposition 8, a state constitutional amendment that passed in November of 2008 before being ruled unconstitutional in 2010.

While the church has previously argued that homosexuality is a “curable condition.” Today it says, “the experience of same-sex attraction is a complex reality for many people. The attraction itself is not a sin, but acting on it is.” BYU is ranked as the second-most LGBTQ-unfriendly college in the United States, just behind the College of the Ozarks in Missouri.

For Bird, all this meant feeling he needed to remain deeply closeted, a feeling that only grew alongside his popularity playing Cosmo the Cougar.

“I wore another mask while I was at BYU — a mask to cover the shame I felt for being “different,” said Bird.

“For years I pleaded with God to change my sexual orientation, but after returning to BYU from a full-time mission for The Church of Jesus Christ of Latter-day Saints, I began realizing that being gay is an integral part of who I am,” he added. “As I grappled to develop a better understanding of myself, I felt immense pressure to hide my sexual orientation. I was hyper-aware of what some of my peers said about the gay community, how they viewed same-sex attraction and the often unkind and insensitive words they used to describe LGBTQ people — people like me.”

In coming out, Bird hopes his experiences will inspire others to show empathy and support to the LGBTQ community.

“Everyone deserves a life where exuberant, transformative experiences are not blanketed in sadness like mine often were,” says Bird. “By actively showing love and acceptance, we can create a space in which people can remove their masks, no longer subject to the isolation and hopelessness that comes with feeling obliged to hide who they really are.”

A comedian licked a journalist’s ear while he was reporting. Is it assault?