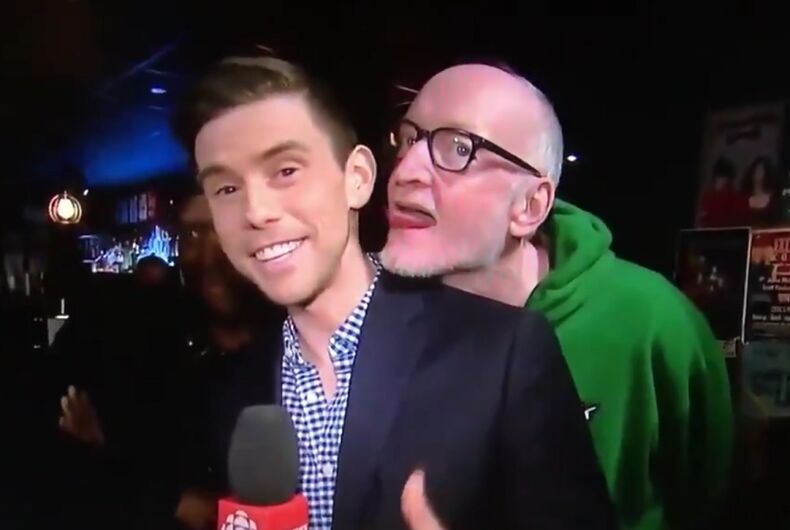 The Canadian journalist for CBC, Chris Glover, was talking to the camera at the Comedy Bar in Toronto when Banks approached him from behind on Tuesday.

Banks, who has appeared on Canadian television, nuzzled up, looking at the camera. In what appears to be an attempt to get attention, he licked Glover’s ear and kissed him.

“Things are getting a little awkward out here, so I’m going to pass it back to you,” Glover said, talking to CBC host Dwight Drummond. Glover laughed nervously.

The entire incident was caught on camera.

This is so disturbing and I get more uncomfortable every time I watch this creepy guy assault @chrisgloverCBC on live television. Why do people think it’s OK to #harass & #assault reporters while they do their job?! It’s gotta stop! @chrisgloverCBC @CBCToronto #Toronto #reporter pic.twitter.com/rSeTStQI5L

Glover filed a report yesterday with police about the incident and said that he would leave it up to law enforcement to determine whether what happened was assault or sexual assault.

He said that the incident made him feel “deeply disturbed.”

“I, as a journalist, was just trying to do my job,” he said.

“I still feel like it was completely uncalled for. The whole thing just really made me feel really awkward and uncomfortable and embarrassed.”

The owner of the Comedy Bar has banned Banks for his “reprehensible behavior.”

Boyd called a radio show yesterday to publicly apologize for what he did.

“There is no excuse for my behavior last night. I’m guilty of everything,” he said.

“I am an idiot. I want to apologize to the standup community in Canada and of course the reporter, who was doing his job.”

A Mormon university’s mascot just came out. He feared rejection for years.