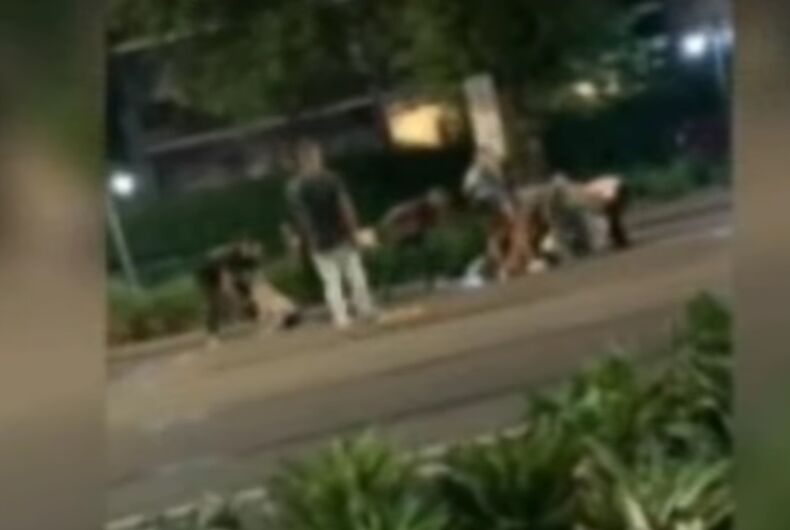 Six people have been charged after a transgender woman was assaulted and two police officers were brutally attacked.

Trent Potts, 26,  was part of a group attending a 30th birthday party that included his sister, Kayla Potts, 25, her fiancé Jack Houldcroft, 27, as well as Phillip O’Donnell, 38, and Jules Tobin, 26, at a bar in St. Kilda, a suburb of Melbourne.

Members of the group got rowdy, arguing outside the bar. A transgender woman, whose name has not been released, attempted to intervene. Trent Potts then kneed the woman in the groin.

When police arrived on the scene, Mr. Potts and others were trying to leave the scene in a taxi.

While Senior Constable Adam McKenzie was questioning Potts, he attempted to flee.

Related: The Salt Lake City gaybasher caught on video has been charged with assault

Others from the group joined the fray, as O’Donnell slammed the head of another officer, Senior Constable Darren Shepherd, into the pavement while Houldcroft punched and kicked McKenzie, later also tackling Shepherd. Tobin also allegedly spit on one of the officers.

The assault was caught on a cell phone camera, and the video backs up police accounts of the incident. Many have reacted angrily to the incident, even leaving angry messages on  Houldcroft’s Facebook page, and revealing the address of other members of Kayla Potts’s family.

The group is now facing a minimum of six months in jail for their actions, due to a sentencing act passed in 2018 that makes injuring emergency services works, such as police officers, an offense akin to murder or rape.

The police are still seeking others who were involved in the attack.