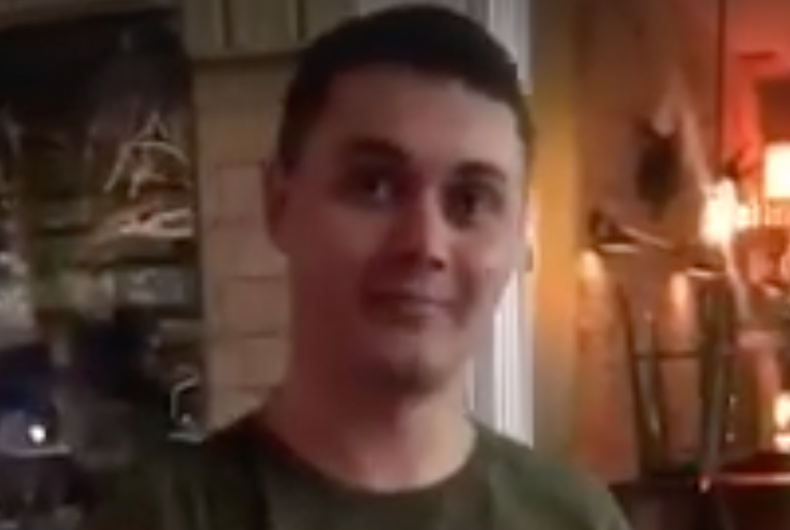 A 22-year-old man named Carlo Alazo has been charged with one count of threatening to use a weapon in a fight and two counts of assault (all misdemeanor charges) after he was filmed in Salt Lake City, Utah earlier this week threatening a gay person named Sal Trejo.

In the cell phone video, which quickly went viral, Alazo asked Trejo, “Are you gay, though?”

Alazo responded, “Oh, then you are gay.”

And Trejo said, “Yeah, but …” Then, Alazo appears to hit the phone out of Trejo’s hand. Shocked, someone off-camera responds, “Are you f*cking kidding me?”

My friends and I were assaulted by this homophobic man in downtown Salt Lake City last night. Anyone know him? The police are interested in having a chat with him. #SaltLakeCity @slcpd @slcmayor @EqualityUtah pic.twitter.com/1tPFSCADOp

Alazo reportedly shoved one of Trejo’s female friends, shouted anti-gay slurs and pulled a butterfly knife on Trejo and his three pals before dropping the knife, picking it up, running off to his BMX and speeding off. Trejo believes Alazo was drunk.

Later, Trejo posted the video on social media and asked others to help identify the perpetrator. The video was re-shared over 8,722 times.

Alazo will not face hate crime charges, but Trejo has used the incident to encourage others to support SB103, a Utah Senate Bill that would extend hate crime protections to those targeted for their gender identity, race, religion, sex, national origin or sexual orientation.

Many attacks against LGBTQ people are never prosecuted as hate crimes because hate crime charges raise a prosecutor’s burden of proof. Prosecutors must show that an attacker was motivated by their hatred of a certain group, something that can be difficult to prove. However, an assailant uttering homophobic language can certainly help prosecutors.

National statistics suggest that hate crimes against LGBTQ people have been increasing since 2016. Vanessa Panfil, a professor of criminal justice, told BuzzFeed News that violence against LGBTQ people might be connected to the Trump administration’s anti-LGBTQ policies and rhetoric.