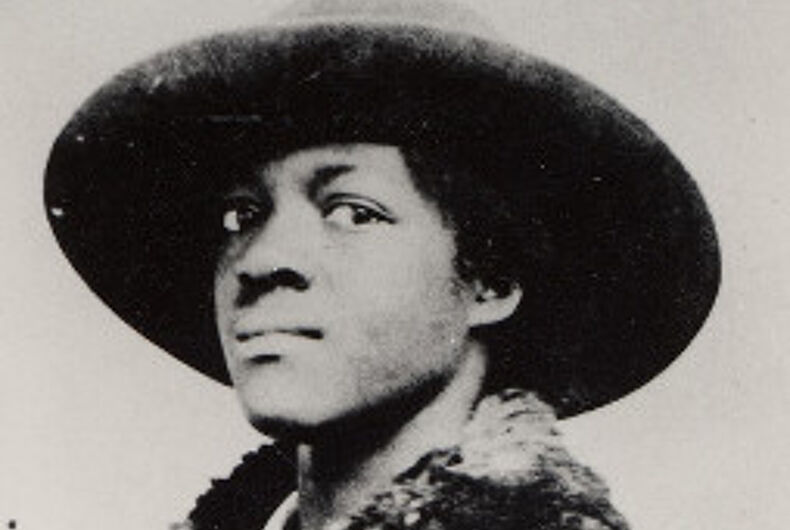 New York did not initially turn out to be a haven for Hampton. She ran away from home within a year of arriving, after being poorly treated by her family and raped by her uncle.

“My aunt went out one day, and he raped me,” she would later recall. “I said to myself, ‘I’ve got to leave here.’…So this day, I got tired of that. I went out with nothing on but a dress, a jumper dress, and I walked and walked.”

Hampton walked to a playground where Bessie White found her and took her under her wing. White took Hampton into her New Jersey home and refused to return her to an abusive situation. Hampton lived in White’s house until she was 17-years-old, when White passed away.

On her own at 17, Hampton was falsely accused of prostitution and spent two years in Bedford Hills Reformatory in Westchester County. She was put back in jail after neighbors told police she was attending women’s parties in New York City. After being released a second time, Haptom stayed in a community of women and worked as a dancer in Brooklyn’s seaside resort, Coney Island, for a women’s troupe.

Hampton spent the 1920s dancing in all-black productions and private parties with stars like Jackie “Moms” Mabley and Ethel Waters. She danced in a chorus line at Harlem’s Garden of Joy nightclub, which catered to a primarily gay and lesbian clientele. She eventually became an actress at the Cherry Lane theater.

The artistic, cultural, and political setting of the Harlem Renaissance gave Hampton access to an entire gay and lesbian community. Her recollections of New York’s lesbian parties in the late 1910s and 1920s would provide a window into gay life in New York City, and recount the terms lesbians and queer women used to refer to themselves. In her recorded oral history, Hampton said the women of her time used to identify themselves as “bulldykers and ladylovers, studs and butch.”

When the Great Depression hit, and the Harlem Renaissance ended, Hampton worked as a domestic, cleaning the houses of wealthy white New York City families. When asked why she traded the chorus line for work as a cleaning lady, Hampton replied, “I like to eat.”

In her essay, “Excerpts from the Oral History of Mabel Hampton,” Joan Nestle, with whom Hampton would co-found the Lesbian Herstory Archives in New York City, wrote that Hampton was asked on many occasions “When did you come out?”

Her usually brusque answer was, “What do you mean? I was never in!”

To the dismay of her friends, Hampton dressed in masculine clothes most of her life. Her appearance adversely impacted her efforts to find better employment, but she was knowledgable and persistent, and never stopped trying to find middle-class positions. She registered with the United States Department of Labor only to be told, “We will get in touch with you as soon as there is a suitable opening.”

In 1932, Hampton met Lillian Foster, whom she later described as “dressed like a duchess.” Decades later, Foster recalled, “Forty-four years ago I met Mabel. We was a wonderful pair. I’ll never forget it… We haven’t been separated since in our whole life. Death will separate us. Other than that I don’t want it to end.”

The two referred to themselves as “Mabel and Lillian Hampton.” They let the rest of the world assume they were sisters, which allowed for displays of affection and afforded some recognition of their intimate relationship.

Born in Norfolk, Virginia, Foster came from a southern background, like Hampton, but also belonged to a large family. She worked her whole life as a presser in white-owned dry cleaning shops. Years spent laboring in poorly ventilated rooms filled with chemical fumes took its toll on Foster’s health, but together she and Hampton created a household that was a warm and loving environment for their diverse community of friends.

Hampton and Foster got through their early years together with home businesses, rent parties, and the help of friends. Hampton did daywork for a local family and spent her free time surrounded by lesbian contemporaries and working in the community.

She volunteered for the New York Defense Recreation Committee collecting cigarettes and refreshments for Black soldiers at the Harlem USO and served as an air raid warden. Despite her meager earnings, she contributed to the Martin Luther King Memorial Fund and gave to LGBT organizations.

When a fire destroyed their apartment in 1976, Hampton and Foster came to live with Nestle and her partner Deborah Edel in Brooklyn until they could get a place of their own. The residence would also become the home of the Lesbian Herstory Archives.

After 46 years together, Foster died in 1978. Suddenly alone, but surrounded by the support of her friends in the community, Hampton remained active and involved in issues important to her. She marched in the first national gay and lesbian civil rights march in Washington, DC, appeared in the films “Silent Pioneers” and “Before Stonewall,” and spent her final years helping to catalog the lives of Black lesbians in the 20th century with the Lesbian Herstory Archives.

Did this popular LGBTQ activist burn down his own house in a fake hate crime?

South Dakota kills bill that would have held back transgender athletes