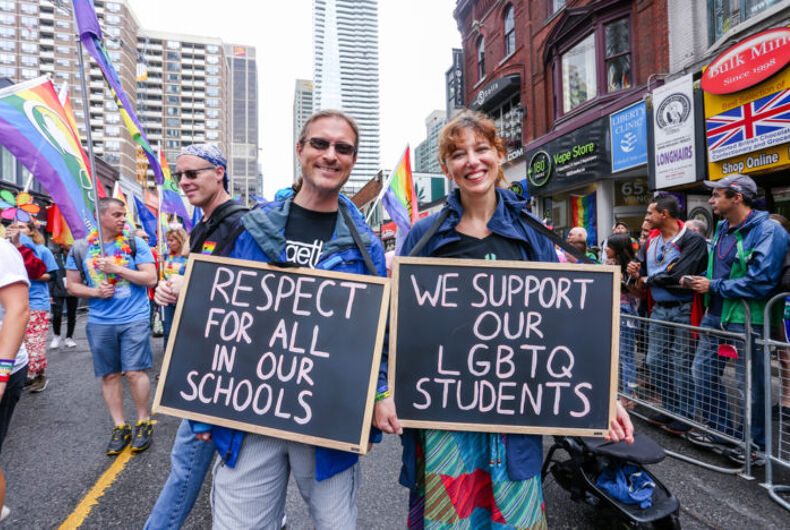 South Dakota lawmakers killed their fourth anti-transgender bill this legislative season, rejecting HB 1225 in a late evening session. The bill would have required high school athletes to only complete against members of their birth gender.

“For purposes of participation in athletics sanctioned by the South Dakota High School Activities Association, the sole determinant of a student’s sexual identity is the sexual identity noted on the student’s certificate of birth,” read the text of HB 1225.

Currently, the participation of transgender students in school sports programs is governed by a policy managed by the South Dakota High School Activities Association which allows students to  participate in sports congruent with their gender.

Related: USA Powerlifting has banned all trans women from its competitive events

“We’re thrilled with the committee’s decision kill this bill, sending a clear message of inclusion and acceptance for our transgender friends and neighbors,” said Libby Skarin, the policy director at ACLU of South Dakota, via press release.

“All young people should have the opportunity to play high school sports and have their personal dignity respected. Transgender students are no different,” Skarin added.

HB 1225 deadlocked in committee days ago on a 6-6 vote, and was sent to the House for discussion.

The decision was one of several bills to get discussed in the House on what is known as “crossover day.” This was the final day on this year’s legislative calendar for a bill to make it out of its house of origin so that it could be taken up in the opposite house.

HB 1225 was placed at the very end of the day, pushing the debate and vote well into the evening.

One notable part of the discussion prior to the vote was the inclusion of recent statements made by tennis legend Martina Navratilova, who spoke out against transgender athletes in a column she penned for The Guardian.

“To put the argument at its most basic: a man can decide to be female, take hormones if required by whatever sporting organization is concerned, win everything in sight and perhaps earn a small fortune, and then reverse his decision and go back to making babies if he so desires,” said Navratilova.

“It’s insane and it’s cheating. I am happy to address a transgender woman in whatever form she prefers, but I would not be happy to compete against her. It would not be fair.

Navratilova’s statements did not sway lawmakers, who opted to stick with the policies of the SDHSAA in governing sports policies in the state.

HB 1225 was the second such attempt to pass a bill in South Dakota this year to bar transgender athletes. The first was SB 49, which was killed in mid-January in a 5-2 vote.

After the failure of SB 49, supporters of the bill filed HB 1225 in a further attempt to bar transgender student from participating. The bill joined two others aimed at transgender people in South Dakota this year.

HB 1205 was defeated in a 10-3 vote in early February. That bill would have enhanced the parental rights for parents of transgender youth, giving them the right to refuse consent for any health care treatment for their child that could, “induce, confirm, or promote the child’s belief that the child’s sex or gender identity is different from the child’s sex presented at birth.” This would have also included any counseling or psychiatric care.

A 7-2 vote also killed HB 1108, which would have barred instructors from discussing gender identity or expression with any students from Kindergarten to the 7th grade. In that bill, the language was so broad that it could have barred any support for transgender students in schools, including attempts to stop the students from being bullied, or seeking help from a school counselor.

With the defeat of HB 1225, the South Dakota legislature has effectively ended its attacks on transgender people – at least for 2019.