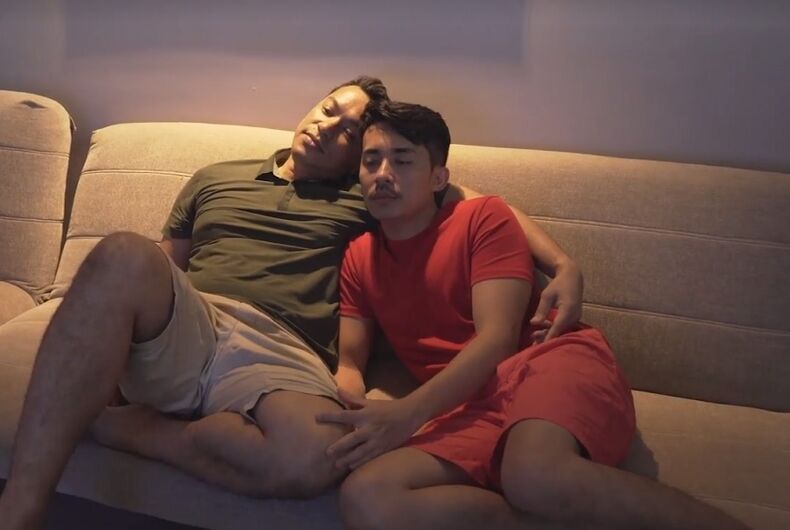 A video about a gay couple that was accepted by their family in Malaysia has been viewed hundreds of thousands of times on Facebook.

Kaal and Faliqh appear in a video made by Dear Straight People. They talk about how they met in 2011 and their close relationship with Kaal’s mother, who may or may not know that they’re a couple.

“One of the factors that kept the relationship going is the love and acceptance from Kaal’s family, they don’t really impose us to be a certain way,” Faliqh said.

“I feel blessed,” he added.

[NEW] Meet Faliqh & Kaal; an openly gay Malay couple blessed with love and support from their family, particularly from Kaal’s mum.'She (my mum) allow us to be what we want, as long as we do it right, do it responsibly. What we are, is what we are.'If the audio doesn't work on your phone, watch the video with sound by plugging in your earphones or on our YouTube channel through a desktop computer: https://www.youtube.com/watch?v=eE4fa9NGDnk&t=9sLike Dear Straight People so you don't miss out on Episode 2 of 'Same Love' and follow us on IG at @dearstraightpeopleig for the latest updates. You can also show your support by joining us on Patreon here: http://bit.ly/PatreonDSP

Related: Malaysia theater to defy censors and show unedited ‘Beauty and the Beast’

The video has been viewed almost 600,000 times on Facebook. It has received almost 3000 comments, many of which are negative.

Over 60% of Malaysia identifies as Muslim, and homosexuality is illegal in the country and LGBTQ characters are usually censored in the media.

An up-to-date guide to the crowded Democratic presidential field