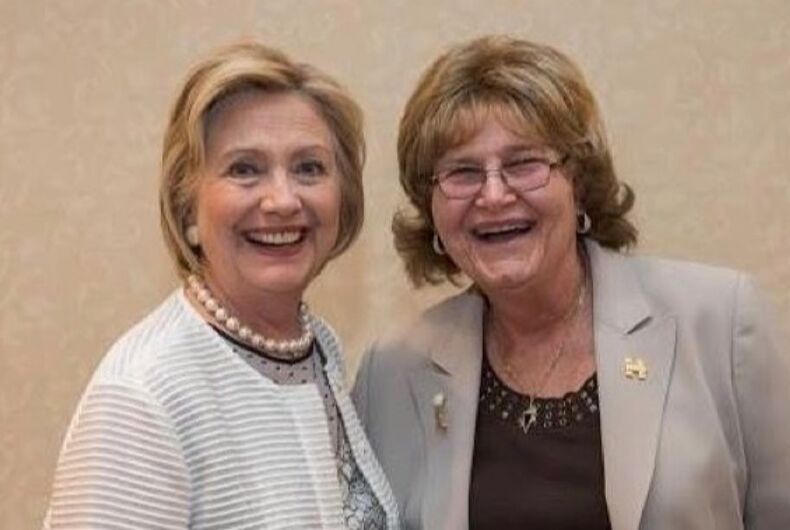 She also served as a superdelegate for Hillary Clinton at the 2016 Democratic National Convention.

And just several days ago, on February 1, the Babs Siperstein Law went into effect in New Jersey. The law makes it easier for people to update their documents and removes the requirement for surgery. It also creates a nonbinary gender option in that state.

“Babs was a towering figure in the LGBTQ community who worked tirelessly to advance the rights of transgender people over the last two decades,” said Christian Fuscarino of Garden State Equality in a statement.

“With Babs, we had an LGBTQ icon — among the likes of Harvey Milk, Sylvia Rivera, and Bayard Rustin — born and raised right here in the Garden State.”

“Babs is a leader, a trailblazer, and a role model for an entire generation of New Jerseyans,” said Senator Cory Booker (D-NJ), who called Siperstein yesterday.

“If you don’t know her, you probably know someone touched in some way by her tireless activism. It’s an honor to know her, to work with her, and to call her my friend. Here’s to many more years of activism to come and to a legacy that has changed the lives of so many.”

“For so many in the Democratic Party, Babs was the first openly trans person they ever met and she undoubtably changed the hearts and minds of many party leaders who were not yet committed to trans equality,” LGBTQ Victory Fund Senior Political Director Sean Meloy, who served as the DNC’s Director of LGBTQ Engagement while Babs was on the executive committee, said.

“She was a constant advocate for the entire LGBTQ community and helped make the Democratic Party more accepting not just of trans people, but trans candidates as well. Her presence in the DNC helped prepare the party and pave the way for trailblazing trans Democratic candidates like Danica Roem and Christine Hallquist – and her impact will be felt for years to come.”

Goodnight, my friend. It has been an honor to know you and learn so much, Babs Siperstein. Your light will never go out.

Rest in Power and peace to one of the trans community's trailblazing leaders in Barbra 'Babs' Siperstein. She passed away last night in NJ #Transcestor #TransElderhttps://t.co/cDcXASf5rd pic.twitter.com/G9MVS9nLNP

Governor Phil Murphy wrote that Siperstein was “a tremendous, passionate advocate for NJ’s LGBTQ community, and a dear friend.”

Tammy and I are saddened by the loss of Babs Siperstein. She was a tremendous, passionate advocate for NJ's LGBTQ community, and a dear friend.

After years of bullying, this trans teen was named Homecoming Queen by her classmates