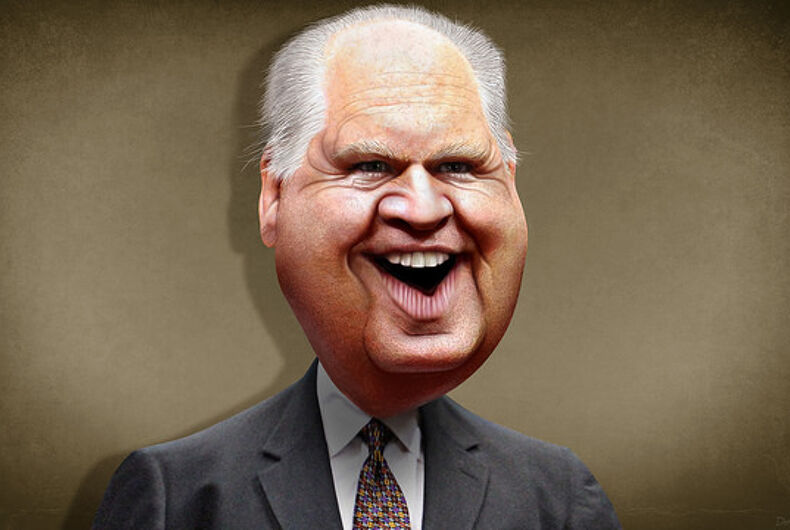 Talk radio host and professional bloviator Rush Limbaugh took to his radio program to once again give his opinion on homosexuality and abortion rights.

This time, he found a novel way to combine the two, claiming that one homosexuality is found to be genetic, the LGBTQ rights movement will become an anti-abortion movement.

“Wait until it is discovered that homosexuality is genetic, and wait until prospective parents could be told that their child might be gay at birth,” said Limbaugh. “You know who’s going to do the fastest 180 from pro-choice to pro-life? The entire homosexual community is going to become pro-life overnight.”

The rant was part of a larger whole, with Limbaugh claiming that abortion rights as a whole “cheapen” life as a whole.

“I’m just telling you, you start cheapening life this way, and then you cheapen it even further by claiming a baby isn’t even a person, a baby is not a human being, then, folks, you’re next, we’re all next, depending on who these people are, how much power they get, and the basis on which they determine who gets to live and who doesn’t,” continued Limbaugh.

“What if down the road, a bunch of liberals decide, you know, rather than have to put up with a bunch of opposition, a bunch of conservatives, let’s just wipe them out. You think that will never happen. It can happen.”

Scientists have long sought a “gay gene” to prove a genetic link to homosexuality, as well as seeking genetic tendencies towards transgender identity — and a number of promising studies have come out.

One study for example, published in Scientific Reports, claims that there are DNA differences between heterosexual and homosexual men to be found in the brain and thyroid. Many in the scientific community dispute this study, however, citing its small sample size and the lack of diversity in the people they studied.

Regardless of a link, it is unlikely to affect the attitudes towards body autonomy found in the LGBTQ community as a whole any more than it ever has.