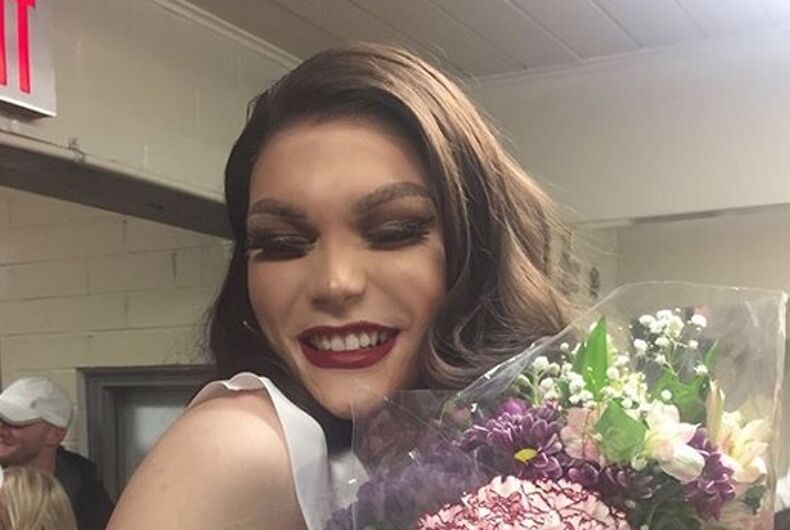 A transgender teen in Georgia was named homecoming queen after years of bullying.

Charlie Baum is a senior at Forsyth Central High School, near Atlanta, Georgia.

She said that she has been bullied there for years, including “death threats and plenty of public humiliation.”

Baum spent middle school “mostly just being sad,” and said that she started dressing in drag and identifying as gay when she was in high school.

“This year, in particular, I spent the first semester not out as trans but instead going to school regularly with crazy dramatic makeup,” she told Pink News. “This angered plenty of people, some to the point of harassment.”

She got called a “faggot” and was asked in a group chat with over 600 people “Do you have a dick or a vagina?”

So Baum was surprised when her friends nominated her for homecoming queen, a title she just won.

the votes are in and history was made! the first transwoman to be nominated for and to win hoco court in forsyth county! • this year harassment and just straight up bullying i’ve dealt with have made it feel very disparaged me from really enjoying myself at school and my senior year, but this win, to me, represents a more progressive and accepting future in one of the most conservative and backwards counties in Georgia. if this tranny can do it, so can you❤️❤️ • face, of course 👁: @juviasplace masquerade palette @katvondbeauty liner @urbandecaycosmetics pencil liner @givefacecos lashes 👩🏻: @toofaced btw foundation and bronzer @tartecosmetics shape tape @narsissist blush @anastasiabeverlyhills brows n highlight 👄: @tartecosmetics lip paint topped with @givenchybeauty red lipstick 💃🏻: @fashionnova earrings @pleasershoes heels • #TheseAreForAttention #makeup #drag #dragqueen #lipstick #tg #ts #lashes #highlight #makeupartist #tranny #localqueen #beauty #trans #transgender #tgirl #gay #queer #eyeliner #lipstick #eyeshadow #eyebrows

“I went from feeling ready to get out of high school so that I could be normal and just feel like a normal girl—not so much of an oddity or outcast—to feeling like there was a majority of students who support me,” Baum said.

“Winning a queen title was never something that seemed feasible to me, so it’s a very good feeling to know that I was wrong. This let me know that I do have a chance at normalcy and royalty.”

She posted about her win to her Instagram channel, where she has almost 3000 subscribers.

“This win, to me, represents a more progressive and accepting future in one of the most conservative and backwards counties in Georgia,” Baum wrote.