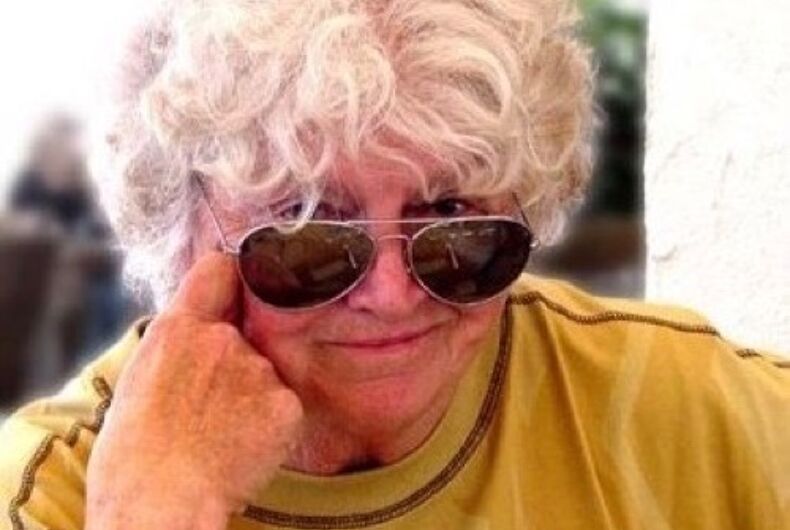 Warren’s 1974 novel, The Front Runner, told the story of a out young Olympic athlete in love with his closeted older coach. The book explored their relationship and exposed the agony of the closet to a wider audience.

LGBTQ running groups all over the nation are named Front Runners after the book. She was working on the fourth book in the series when she died.

But Patricia wasn’t just an amazing author. She was an inspiration to a generation of gays and lesbians who were venturing out of the closet in numbers, but still felt terrified when alone.

As a bookish gay teenager from rural Indiana, before I knew about Harvey Milk, I had read Patricia Nell Warren. She gave me hope. Her novel changed my life when I first read it as a depressed teenager.

Patricia and I started communicating back when email was new. I wrote her my first and only fan mail; she replied right away and we just didn’t stop.

When Jerame Davis, Alex Bollinger, and I started Bilerico Project, one of the first national LGBTQ blogs with multiple well-known contributors, Patricia was the first to sign up. Working with her was a dream come true. She helped us to build our dreams and would encourage us to dream bigger.

Because that’s what Patricia did. She inspired athletes, and authors, and activists.

As news of her death spread amongst the community, the social media anecdotes and tributes started pouring in from others who were as in love with Patricia Nell Warren as I.

I am heartbroken to learn that author Patricia Nell Warren has passed. One must wonder how many gay boys' lives were saved when they discovered "The Front Runner." Thank you, Patricia.

Patricia Nell Warren was such a lovely soul. She graced us with her writing in Bilerico Project from the start. She very…

There are no words to convey hearing that a true friend had just transitioned. Patricia Nell Warren crossed over the…