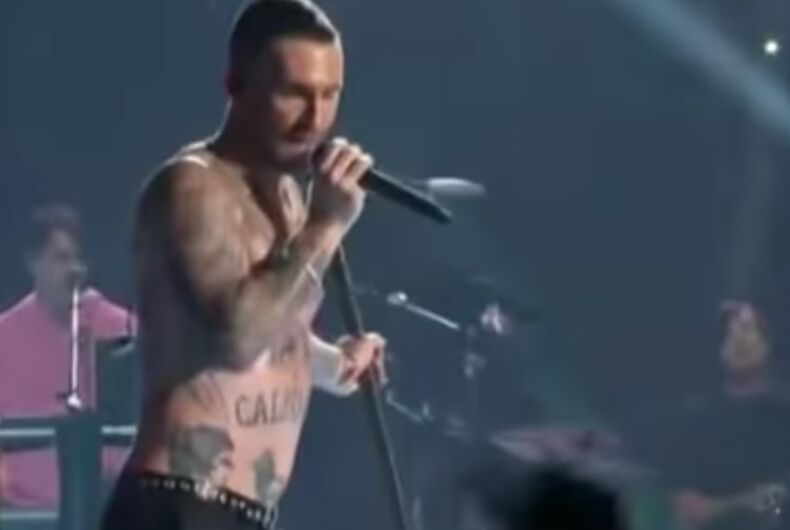 Maroon 5’s Adam Levine went shirtless at the Super Bowl yesterday, and viewers were quick to draw comparisons to the controversy around Janet Jackson’s performance over a decade ago.

During the band’s performance at the Super Bowl yesterday, Levine pulled off multiple garments and was eventually shirtless on stage.

Few people seemed offended, a completely different reaction than what Janet Jackson got at the 2004 Super Bowl Halftime Show.

That year, Jackson briefly and accidentally showed part of one breast during her performance. Justin Timberlake, who performed with Jackson, was supposed to remove part of her top and reveal her bra underneath, but part of the bra accidentally ripped off, according to her publicist.

Related: This year’s Super Bowl will be the first to feature male cheerleaders

The CBS broadcast immediately switched to an aerial view, and her breast appeared on television for less than a second.

The ensuing controversy, though, lasted much longer. The event made Janet Jackson the most searched term in internet history.

Michael Powell, the Chair of the Federal Communications Commission (FCC), was called before the Senate and said that the incident represented “a new low for prime time television.”

NFL Vice President Joe Browne said that his organization was “extremely disappointed” in the performance.

Even First Lady Laura Bush weighed in, saying, “What it represented was a kind of television viewing that we don’t want little children to see.”

CBS was fined $550,000 by the FCC, although a court later overturned that fine, and Jackson was forced to issue an apology video.

Levine in 2019, on the other hand, intentionally revealed his entire chest for much longer than a fraction of a second, and some people people are pointing out the sexism in the double standard around nudity.

Why is it okay to see Adam Levine’a boobs and not Janet Jackson’s?

Asking for a friend.

Janet Jackson when she saw Adam Levine take off his shirt #SuperBowl pic.twitter.com/ubmXpoT3im

so… @adamlevine can strut around shirtless but my girl janet has to issue an appology??? #SuperBowlLIII @JanetJackson

Of course, the difference is that Jackson is a woman and Levine is a man. Mainstream culture has determined that if something is too sexually exciting, then it’s obscene, and it’s straight male sexuality that determines what’s sexually exciting.

Straight men don’t get excited to see another man shirtless – straight women’s and queer people’s sexualities aren’t considered real or important enough to take into consideration – so Levin isn’t too sexual for kids to see.

Women’s breasts, on the other hand, have been labeled as obscene since the before the beginning of television, because they cause straight men to have impure thoughts.

This extremely rare bird is half female & half male. Now it has a boyfriend.

After years of bullying, this trans teen was named Homecoming Queen by her classmates