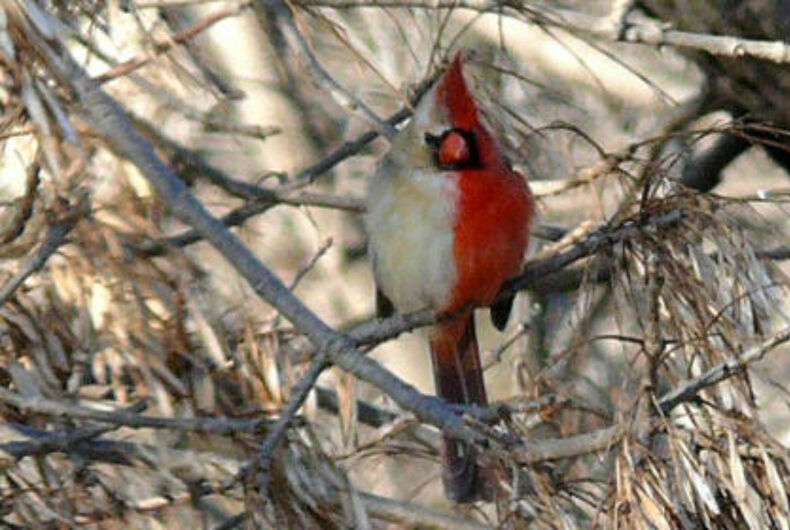 An incredibly rare wild Cardinal was spotted in Pennsylvania after bird watchers noticed it’s distinctive plumage. While males are normally bright red and females a duller brown or yellow, this bilateral gynandromorphic bird is split down the middle – half female and half male.

The cardinal was spotted and photographed by Jeffery and Shirley Caldwell in Erie, Pennsylvania.

“Never did we ever think we would see something like this in all the years we’ve been feeding,” Shirley Caldwell told National Geographic.

“Cardinals are one of the most well-known sexually dimorphic birds in North America—their bright red plumage in males is iconic—so people easily notice when they look different,” Daniel Hooper, a postdoctoral fellow at the Cornell Lab of Ornithology, told the magazine.

While most bilateral gynandromorphic birds are unable to reproduce, the beautiful Cardinal may be capable, Hooper says.

“Most gynandromorph individuals are infertile, but this one may actually be fertile as the left side is female, and only the left ovary in birds in functional.”

The Caldwells are holding out hope. Shirley Caldwell says the unusual avian has a boyfriend. It usually spotted in the company of a male.

“We’re happy it’s not lonely,” she says. “Who knows, maybe we will be lucky enough to see a family in summer!”