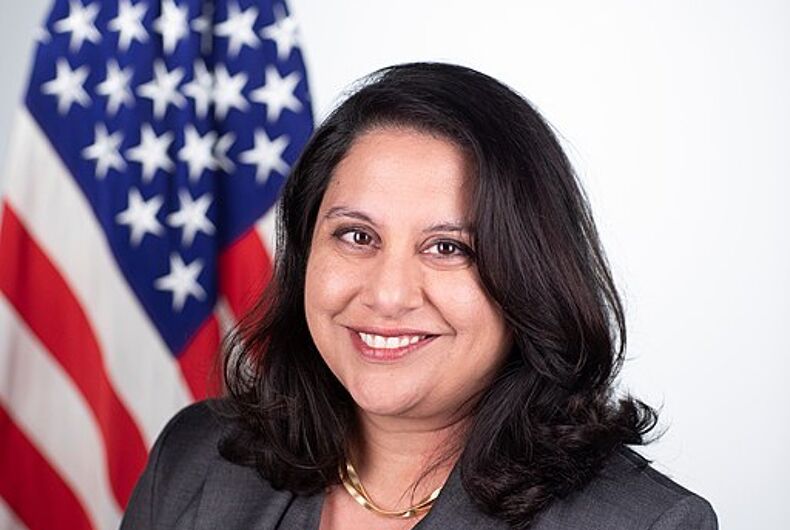 Just when you think the Trump administration has scraped the bottom of the barrel, it rolls out another barrel.

In the latest example of finding the worst possible candidate for any job, Trump has chosen a lawyer as Brett Kavanaugh’s replacement who has dismissed LGBTQ rights as “trendy” and described feminism as having “contemporary associations with radicalism and lesbianism.”

The nominee, Neomi Rao, has impeccable right-wing credentials. Unsurprisingly, her past writings reflect the worst excesses of a culture warrior. As a student at Yale University in the 1990s, Rao made herself a darling of the right by writing for the Yale Free Press, a publication that describes itself as “somewhere to the right of Attila the Hun.”

No liberal cause escaped Rao’s wrath, including LGBTQ rights.

“They [multiculturalists] argue that culture, society and politics have been defined — and presumably defiled — by white, male heterosexuals hostile to their way of life. For example, homosexuals want to redefine marriage and parenthood; feminists in women’s studies programs want to replace so-called male rationality with more sensitive responses common to womyn. It may be kinder and gentler, but can you build a bridge with it?” she wrote in a piece for the Washington Examiner.

In the midst of all her attacks on political correctness and multiculturalism, Rao also found an opportunity to trash rape victims.

“A man who rapes a drunk girl should be prosecuted,” Rao wrote. “At the same time, a good way to avoid a potential date rape is to stay reasonably sober. And if she drinks to the point where she can no longer choose, well, getting to that point was part of her choice…Implying that a drunk woman has no control of her actions, but that a drunk man does strips women of all moral responsibility.”

The thudding irony of nominating someone who has minimized sexual assault to replace someone with Kavanaugh’s history seems to have escaped Trump.

You could argue that Rao’s writings were the products of misguided youth, but there’s no indication that she has matured into anything other than a standard-issue far-right lawyer.

Rao came up through the right-wing ranks, clerking for Supreme Court Justice Clarence Thomas and serving as a law professor at the Antonin Scalia University of Law at George Mason University. Need we say more?

Rao is currently serving in Trump’s administration as the administrator of the Office of Information and Regulatory Affairs, which reviews proposed government regulations.

She has never served on the bench, which makes her appointment to the U.S. District Court in D.C., one of the most influential courts in the judiciary, all the more confounding. Trump is also reportedly considering her as a potential Supreme Court nominee.

Other Trump picks have had their nominations vaporize when their musings came to light. Ryan Bounds had his nomination sunk by his racially offensive writings.

Rao has a rich vein of equally offensive clips, but Trump obviously considers that a feature of her candidacy, not a bug.

This Gillette ad takes on toxic masculinity. Of course the right lost its mind.