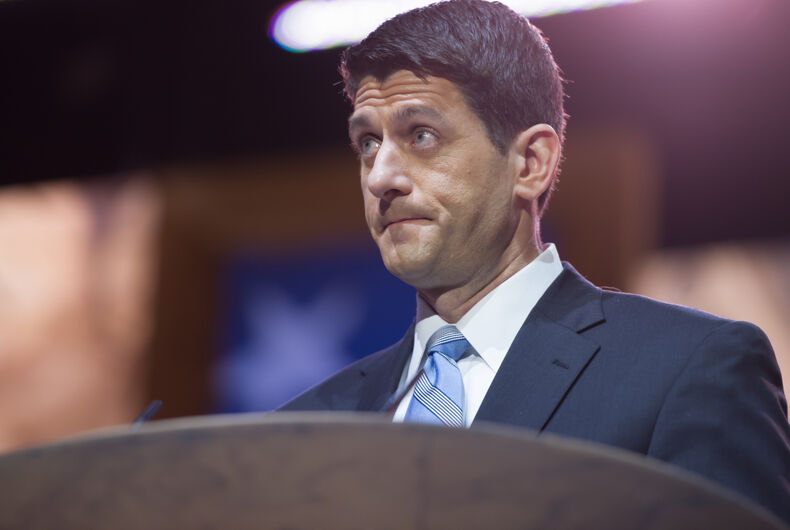 “I would just say that of course there needs to be a degree of independence between [the Department of Justice], FBI, and the White House and a line of communications established,” he said. “The president’s new at this. He’s new to government, and so he probably wasn’t steeped in the long-running protocols that establish the relationships between DOJ, FBI, and White Houses. He’s just new to this.”

Ryan’s excuses and his spineless refusal to speak out against this president’s morally bankrupt antics begs the question: Why did Ryan support a president he had serious doubts about during the primaries regarding Trump’s temperament and ability to lead?

Trump is a liar and racist nationalist. Republican leaders who don’t speak out are enabling conspirators.

“Enabler” is the term given to those who fail to act by stopping abusers. “Passive bystander” or “bad Samaritan” is the name for people who are conscious of bad actions developing around them but fail to intervene.

Enabling and passively standing by take many forms, including offering an addict substances or conspiring with an abuser in a sinister plot, contributing to the denial of addicts and aggressors by asserting that they don’t have a problem, downplaying the seriousness and making excuses for their behaviors, translating for others what the person “really meant,” downright lying, and so on.

How many times have we heard, “He didn’t mean it that way. What he really meant to say was…” and “You are misunderstanding her”?

Each time anyone enables an abusive action, they keep perpetrators further from the truth and from help; they diminish themselves and their integrity.

Ryan supported and enabled Trump because both men agree on one primary assumption attributed to Thomas Jefferson: “That government is best which governs least.” Ryan, however, has long taken this to the extreme.

His philosophical underpinning centers on a market-driven approach to economic and social policy, including such tenets as reducing the size of the national government, granting more control to state and local governments, and severely reducing or ending governmental regulations over the private sector.

He also pushed a draconian so-called “tax reform” plan and a national budget that places billions more dollars into the pockets of the rich and super rich, while imposing increasingly greater hardships on the remainder of our people by taking away many of the safety nets and programs needed by deserving U.S.-Americans and countries in the form of aid.

Ryan was weaned on the philosophy of “objectivism” (or rational individualism in which proponents assert there are objective standards of truth) articulated by Ayn Rand in her novels and non-fiction works.

Rand, who has become the intellectual center for the economic/political/social philosophy of Libertarianism, constructs a bifurcated world of one-dimensional characters in her novels.

On one side, she presents the noble, rational, intelligent, creative, inventive, self-reliant heroes of industry, music and the arts, science, commerce, and banking who wage a noble battle for dignity, integrity, personal, and economic freedom, and for the profits of their labors within an unregulated “free market” capitalist system.

On the other side, she portrays the “looters” represented by the followers, the led, the unintelligent, misguided, and corrupt government bureaucrats who regulate and manipulate the economy to justify nationalizing the means of economic production. They confiscate personal property, dole out welfare to the the lazy, and destroy personal motivation resulting in dependency.

Rand deems welfare as “unearned rewards,” while she argues for a system of laissez-faire Capitalism separating economics and state. She bristles against the notion of collectivism, shared sacrifice and shared rewards.

Rather, she argues that individuals are not and should not be their brothers’ and sisters’ keepers, personal happiness is paramount, and the greatest good is what is good for oneself rather than for the greatest number of people.

Rand paints a world in which the evil and misguided “takers” wage war against the noble and heroic “makers.”

Paul Ryan blamed men “in the inner city” on their “real culture problem” for their higher rates of unemployment in 2014, saying “We have got this tailspin of culture, in our inner cities in particular, of men not working and just generations of men not even thinking about working or learning the value and the culture of work, and so there is a real culture problem here that has to be dealt with.”

“Right now about 60 percent of the American people get more benefits in dollar value from the federal government than they pay back in taxes,” he said in 2012.

“So we’re going to a majority of takers versus makers in America and that will be tough to come back from that. They’ll be dependent on the government for their livelihoods [rather] than themselves.”

Ryan, who demanded personal family time as a major condition for taking over the Speakership, consistently opposed legislation that would have extended paid family leave benefits for new parents. For example, in 2009, he voted against the proposed Federal Employees Paid Parental Act.

Paul Ryan claimed that he read Ayn Rand growing up, and “it taught me quite a bit about who I am and what my value systems are, and what my beliefs are,” he told members of the Atlas Society, an organization devoted to Any Rand in a 2005 speech.

“The reason I got involved in public service, by and large, if I had to credit one thinker, one person, it would be Ayn Rand.” He went on to say, “And the fight we are in here, make no mistake about it, is a fight of individualism versus collectivism.”

Rand and Ryan would rather blame poverty within our communities and low achievement in our schools on the “cultures” of those suffering from the social inequities. This “cultural deficit model” detracts and undermines us from interrogating and truly addressing the enormous structural inequities pervasive throughout our society, which Libertarians would have us multiply if we were to follow their lead.

So-called “social issues” become wedge issues to attract people to a candidate. In the final analysis, though, when middle- and working-class people vote for these candidates, they essentially vote against their own economic self-interests.

Ragnar Danneskjöld, Rand’s so-called moral crusading pirate and symbol for “justice” in Atlas Shrugged, quite tellingly expressed her true purpose when she put these words in the pirate’s mouth:

“I’ve chosen a special mission of my own. I’m after a man whom I want to destroy. He died many centuries ago, but until the last trace of him is wiped out of men’s minds, we will not have a decent world to live in.”

Hank Rearden, one of Rand’s “righteous” industrialists asks: “What man.”

Now with his departure from his high perch of power, Paul Ryan will rob us no more.