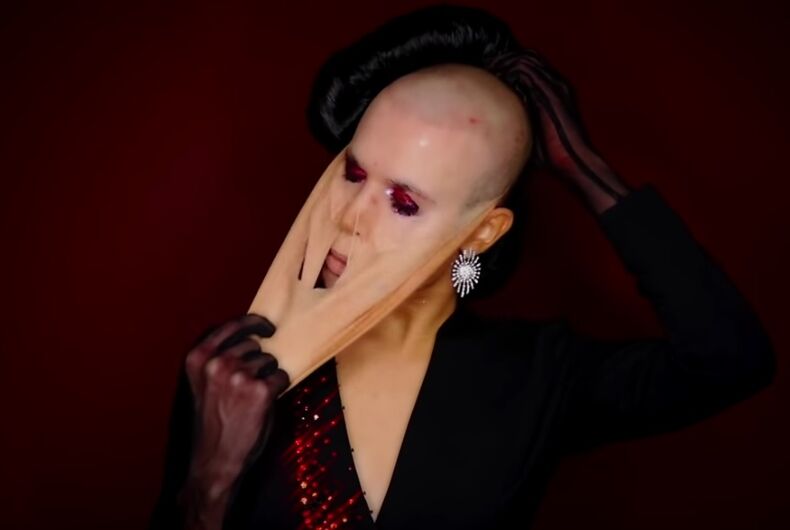 Like this one, where he turned into Jane Fonda.

Rentz, who lives in Liverpool, spent the last several months pranking his followers by pretending to get cosmetic surgery.

Related: This drag queen broke character & it brought the audience to tears

He announced in a YouTube video this past August that he was going to get plastic surgery. Then he followed the process of that surgery with pictures on Instagram.

Consultation done! Time for the surgery! ⚒💉

Hello everyone! Alexis’s surgery went smoothly and on schedule.l! He is now recovering from the comfort of his hospital bed. He would like to thank everyone for the kind messages. Alexis’s instagram account will remain ACTIVE throughout his recovery period and pre filmed transformations will be posted whilst he enjoys some much needed time away from the internet 💕 There is a video on Alexis’s YouTube channel regarding what procedures he’s had done!

He said that the content on his Instagram feed was pre-recorded for a few months, and then in November he came back with this picture in November, in which he said that he was very “swollen.”

I Own 51% Of This Company 🗃 Thank you all so much for the overwhelming love and support over the last 12 hours since uploading my latest YouTube video as well as the last month of my recovery. I haven’t felt this happy and confident in years 😫💕 It’s not even been a month post op so please take into consideration that I’m still very swollen and textured from surgery before alerting me I look 65. I’m wearing my Jane Fonda wig and a suit, I’ll be back to my pussy stunting self soon 💫🐅 Link to video in my bio 👆🏻 ____ Use code THEALEXISSTONE for $ off with @ttd_eye

Change scares most people. I’ll be uploading a new YouTube video in 2 weeks.

In December, he thanked his fans for standing by him as he had surgery.

But, on New Year’s Eve, it was time for the big reveal. He posted a video to YouTube where he pulled off his mask, Scooby Doo style.

He later said that he worked with David Marti, a professional special effects artist who works on films, to put together what he called a “social experiment.”

He said he wanted to “bring attention to the social construct of becoming a monster.”

“If enough people scream and shout that someone’s a monster… it becomes believable.”

Hmmmm…. Well, that’s for his fans to debate, whether he actually got a message across. Either way, the transformation was pretty extreme.