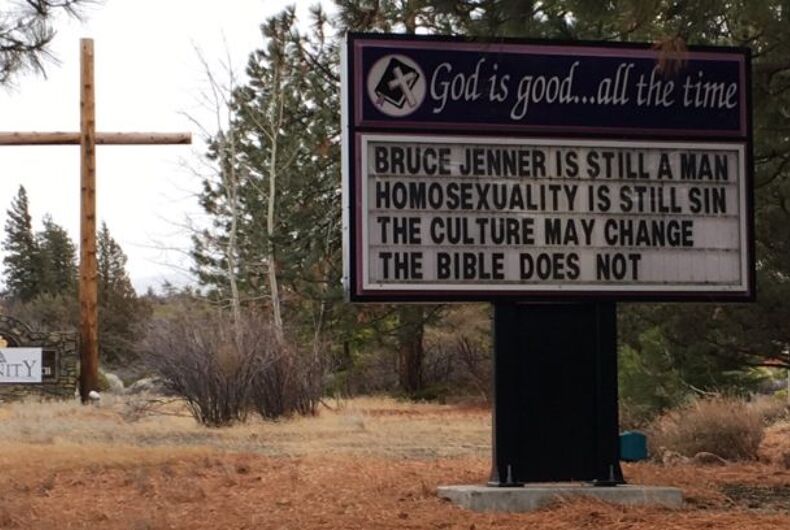 An anti-LGBT sign was posted in front of Trinity Bible Presbyterian Church and neighbors are upset by it. Photo: Twitter/Jennevieve Fong

Justin Hoke, the pastor who put up an inflammatory sign decrying gay people and deadnaming Caitlyn Jenner, was forced out of his position in the church.

Hoke made headlines last week with the sign outside the Trinity Bible Presbyterian Church, which read, “Bruce Jenner is still a man. Homosexuality is still a sin. The culture may change. The Bible does not.”

He posted on Facebook at the time that the sign “rebuked sin” and “called” people to “repentance.”

In response, neighbors of the northern California church rallied to show that they “care about all members of our community, regardless of orientation gender or other aspects of identity that make them unique.”

Someone also vandalized the sign, breaking the glass and stealing some of the letters.

The other elder agreed to take on the role of pastor and Hoke left.

As of today, I am no longer the pastor of Trinity Bible Presbyterian Church.After much prayer and counsel, I have…

“The response we’re receiving from this sign proves that it was posted way too late,” he wrote in the comments of the original post of the sign.

“If a conservative mountain farming community is no longer a safe place to call sin, sin. Then is anywhere in this country still safe for real Christians?”

“Even acknowledging that we live in a more rural, and generally a more conservative area — the fact that somebody thought that that would be accepted by our community was definitely surprising,” Amelia Mallory, who organized the rally to support LGBTQ people, told the LA Times.

ISIS threw gay men off a tower to execute them. Now the building is being destroyed.