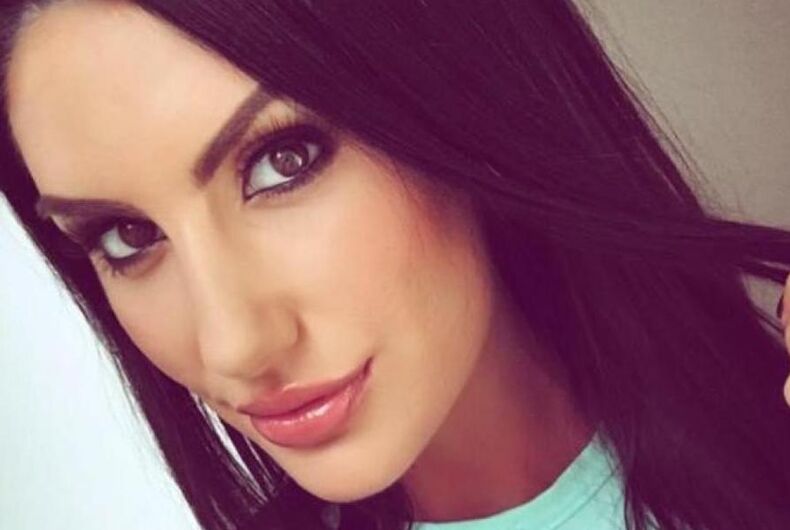 On December 4, 2017, 23-year-old female adult film performer August Ames told Twitter that she’d refused to work with a male performer who had appeared in a gay adult film production because she didn’t want to risk her health. Many Twitter users found her tweets homophobic.

Two days later, she killed herself by hanging. Many Twitter users and her husband, Kevin Moore, blamed gay Twitter users for her death. In particular, Moore cited a tweet by pansexual adult performer Jaxton Wheeler telling Ames to apologize or take a (poison) cyanide pill.

A new book by Welsh journalist Jon Ronson entitled The Last Days of August examines the factors that possibly contributed to Ames’ suicide, including the Twitter backlash, her self-professed struggles with mental illness and allegations of abuse by her husband.

Ronson is the author behind the books Men Who Stare at Goats (which was later turned into a film of the same name) and So You’ve Been Publicly Shamed, a book about the effects of widespread public shaming on social media.

In the offending December 4, 2017 tweets, Ames, who identified as bisexual, wrote:

Three weeks before her suicide, Ames discussed her struggles with bipolar depression and multiple personality disorder on a podcast, stating that her sudden onsets of depression sometimes caused her to stay in bed for weeks, compelling her to cancel all of her adult film shoots.

According to a review of The Last Days of August, Ronson claims that Ames’ husband had “a previous long-time girlfriend [who] also committed suicide and an ex-wife [who] was institutionalized after her relationship with Moore deteriorated.”

The reviewer also says Ronson depicts Moore as “a controlling, toxic loner who alienates his romantic partners from other people.”

While Ronson doesn’t conclusively say whether Moore influenced Ames’ suicide, the reviewer worries that Ronson may have made Moore a target for suspicion in an underserved way.

After her suicide, gay adult performer Austin Wilde stood behind his tweet criticizing Ames for her views. Wilde believes her words came from mostly from a place of ignorance, but he still believes such viewpoints can spread harmful homophobia.

Since my one comment was neither threatening or harassing, I do stand by my words. They were my response and opinion to her opinion that displayed her to be homophobic and uneducated on the subject. As a model and business owner on the gay side of the industry who thoroughly tests his models and self, uses the PASS network (a sexually transmitted infection testing service used throughout the adult film industry), and considers sexual health and safety to be one of my top priorities, I found her statements to be just what I said — homophobic and uneducated.