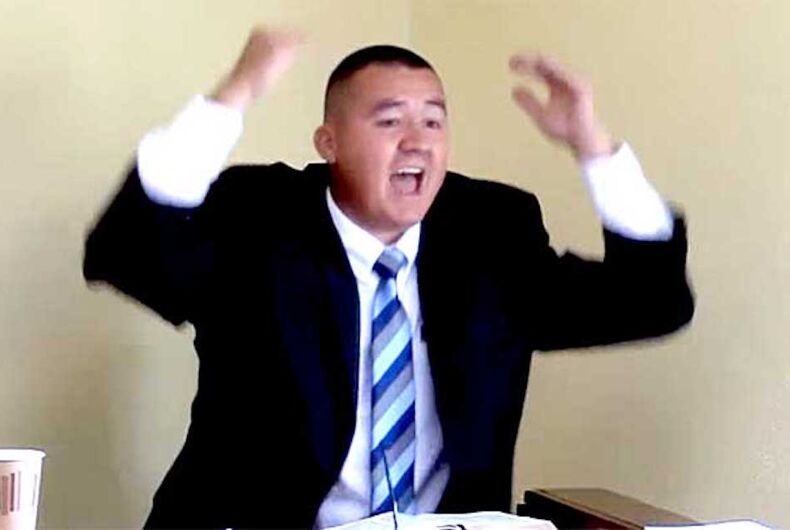 This week, Donnie Romero — an anti-LGBTQ pastor at the Stedfast Baptist Church of Fort Worth, Texas — resigned over his “sins” of gambling, smoking weed and hiring sex workers. His church was labelled as an anti-LGBTQ hate group by the Southern Poverty Law Center in 2015.

Romero considers gay people “f*ggots” and “pedophiles” who should all be “put to death.” After the June 2016 Pulse nightclub shooting that killed 49 and injured 53, Romero asked God to “finish the job” by killing the other hospitalized victims.

In his tearful resignation video posted on Wednesday, Romero told his congregation, “I have not been ruling my house well. I have been a terrible husband and father.”

In the video, Anderson said, “The major sin involved was being with prostitutes. And then there were also marijuana and gambling that were also discovered.” Anderson called these “grievous sins.”

If Anderson’s name sounds familiar, it could be because he’s also cut from the same anti-LGBTQ cloth as Romero. He also praised the Pulse nightclub shooter, calling them “a bunch of disgusting perverts and pedophiles” and “disgusting homosexuals who the Bible says were worthy of death.”

In the past, Anderson has encouraged his congregants to kill all gay people, calling it a “cure for AIDS.” He has also advocated for world governments to execute gay people. (At least 10 world countries do actually kill people just for being gay, by the way.)

Anderson has proved so hateful that he has actually been banned from South Africa, the UK, Canada, and Jamaica for his bigoted views.

Perhaps Romero will now consider cheating on his wife with sex workers before criticizing gay people for their “sins.”

The CW will soon film a pilot for ‘Batwoman,’ making it the first-ever lesbian-led superhero TV show