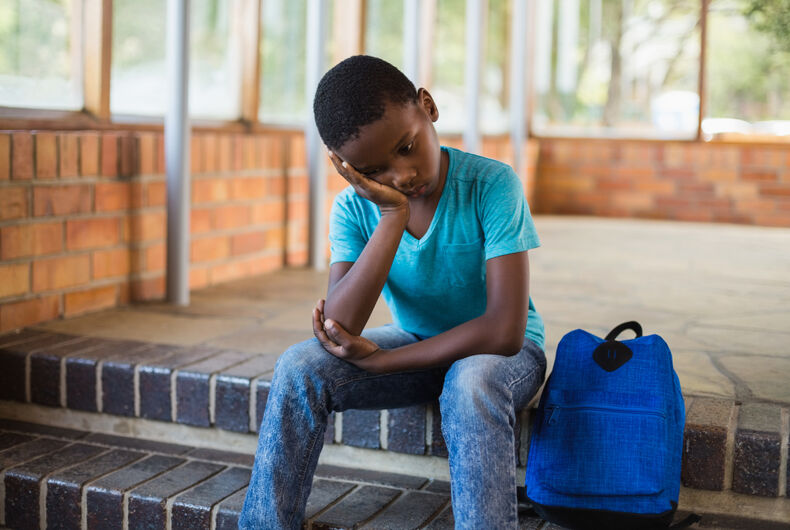 Arizona Republican State Representative Mark Finchem submitted a bill to the Republican-dominated legislature that if passed and signed by the governor, would prohibit public and charter school teachers from discussing “controversial” topics in the classroom.

The bill would ban “political, ideological or religious” advocacy or discussions with students, or “endorsing, supporting or opposing any legislative, judicial or executive action.” In addition, it prohibits teachers from “blaming one racial group of students for the ‘suffering and inequities’ experienced by another racial group.”

Since issues related to the numerous forms of oppression—such as racism, sexism, heterosexism, xenophobia, ethnocentrism, and other forms—could be considered “controversial,” discussions on these topics could be banned. Teachers found “guilty” of breaking the law could lose their jobs.

This type of law is nothing new to Arizona. In May 2010, the Arizona legislature passed House Bill 2281, signed into law by then Governor Jan Brewer, targeting public school districts’ ethnic studies programs.

Arizona School Superintendent, Tom Horne, who was running for Arizona Attorney General and a primary supporter of the bill, asserted that the law was necessary because, in particular, Tucson’s Mexican-American, African-American, and Native-American studies courses teach students that they are oppressed, encourage resentment toward white people, and promote “ethnic chauvinism” and “ethnic solidarity” instead of treating people as individuals.

American academic author Joel Spring calls this bill a form of “cultural genocide,” literally defined as “the attempt to destroy other cultures” through forced acquiescence and assimilation to majority rule determined by cultural and religious standards. This cultural genocide works through the process of “de-culturalization,” which Spring describes as “the educational process of destroying a people’s culture and replacing it with a new culture.”

An example of “cultural genocide” and “de-culturalization” can be seen in Christian European-Americans’ domination over Native-Americans, whom European-Americans viewed as “uncivilized,” “godless heathens,” “barbarians,” and “devil worshipers.”

Related to the Arizona law and Mr. Horne, we could ask, where were the cries against “ethnic chauvinism” in 1790 when European-heritage (“white”) people, and in particular U.S. Senators and Representatives passed the Naturalization Act excluding all non-whites from citizenship. The law included Asians, enslaved Africans, and Native Americans.

Where were the cries against “ethnic chauvinism” when the U.S. military and so-called “settlers” of European-heritage committed genocide, confiscated Native-American lands and forced Natives onto restrictive “reservations” of the poorest quality land?

Where were the cries against “ethnic chauvinism” when people of European-heritage enslaved, tortured, and killed Africans on this continent?

Where were the cries against “ethnic chauvinism” when people of European-heritage fabricated false justifications to invade Mexican territory and pilfer massive tracks of land to further their socially constructed doctrine of so-called “Manifest Destiny,” founded on the belief that God intended the United States to extend its holdings and its power across the wide continent of North America over the Native-American tribes and Mexicans from the east coast to the west?

Where were the cries against “ethnic chauvinism” when men, primarily of European-heritage, denied women the rights to vote and work outside the home?

Where were the cries against “ethnic chauvinism” when legislators of European heritage falsely incarcerated over 120,000 Japanese-Americans, many born on these shores, into internment camps far from their homes during World War II?

Where are the cries against “ethnic and religious chauvinism” when primarily members of conservative Christian faiths deny lesbian, gay, bisexual, and transgender people to exercise their rights to equal protections under the law as promised in the 14th Amendment of the U.S. Constitution?

Where are the cries against “ethnic chauvinism” in the framing of our school textbooks, as evidenced in debates by the Texas School Board, to (further) enhance the teaching of primarily European-Heritage Studies with only passing mentions of the heroes, holidays, festivals, and foods of “ethnic” groups. Isn’t this, if anything, a prime example of the maintenance of a monocultural dominant curriculum and worldview?

Social theorist Gunnar Myrdal traveled throughout the United States during the late 1940s, examining U.S. society following World War II, and he discovered a grave contradiction which he termed “an American dilemma.”

He found a country founded on an overriding commitment to democracy, liberty, freedom, human dignity, and egalitarian values, coexisting alongside deep-seated patterns of racial discrimination and privileging of white people while subordinating people of color.

The Jewish immigrant and sociologist of Polish and Latvian heritage, Horace Kallen, coined the term “cultural pluralism” to challenge the image of the so-called American “melting pot,” which he considered to be inherently undemocratic. Kallen envisioned a United States in the image of a great symphony orchestra, not sounding in unison (the “melting pot”), but rather, one in which all the disparate cultures play in harmony and retain their unique and distinctive tones and timbres.

In the famous words of African-American social activist Marcus Garvey: “A people without the knowledge of their past history, origin, and culture is like a tree without roots.”

The lives, stories, and histories of minoritized and marginalized people have been intentionally hidden by socially dominant individuals and groups through neglect, deletions, erasures, omissions, bans, censorship, distortions, alterations, trivializations, changes of pronouns signifying gender, and other unauthorized means.

For marginalized people and allies, this information can underscore the fact that their stories, experiences, and feelings are in no way unique, and that others like themselves lead happy and productive lives. This info can spare them years of needless alienation, denial, and suffering.

For people from dominant groups, this can provide the basis for appreciation of human diversity and help interrupt the chain of bullying and harassment toward people different from themselves.

For all students, these so-called “controversial” topics (when presented age-appropriately) have the potential to further engage students in the learning process from multiple perspectives.

Today, the United States stands as one of the most culturally and religiously diverse country in the world. This diversity poses great challenges and great opportunities. The way we meet these challenges will determine whether we remain on the abyss of our history or whether we truly achieve our promise of becoming a shining beacon to the world.