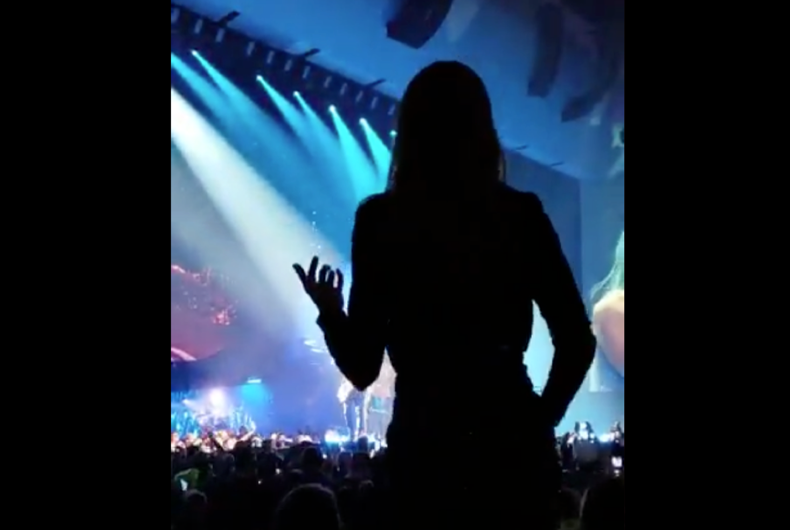 Pop royalty Celine Dion was at Lady Gaga’s Vegas show as the year ended and she definitely enjoyed herself. She might have a reputation for being cool and genteel, but Gaga brought out the heat.

Footage of Dion getting her groove on during the weekend show has gone viral. She dances, sings along, and has some interesting hand flapping and pseudo-voguing going on.

But even more touching was the shoutout Gaga gave Dion from on stage.

“When she was asked if she had any advice for me in Las Vegas, she said I didn’t need it because I was strong and I knew what I was doing,” Gaga told the audience. “And, oh my God, I swear to you, the number of women that I can count on one hand that are supportive in this industry… I would lose fingers, OK? You are amazing.”

Related: Celine Dion is a gender outlaw in her new ad for a clothing line

While Dion’s treacly brand of pop music ballads fell out favor after the 90s, she’s found renewed fame with an ongoing Vegas residency. She’s also let her hair down some and letting her offbeat sense of humor shine though.

After the show ended, Dion sent her own tweet mocking her nonstop dancing and enthusiasm while praising Gaga’s talent and performance.

Celine Dion getting her life at Lady Gaga's show pic.twitter.com/Gj7oV28kf3

I had so much fun last night @Ladygaga ! Your energy on stage is contagious and you literally took my breath away! I wish you all the best with your #Vegas residency! – Céline xx… #Enigmahttps://t.co/3VVQZsApCY pic.twitter.com/j7k2NnHlmX

Andy Cohen fires back at New Years critics, but was he almost dropped from the show?