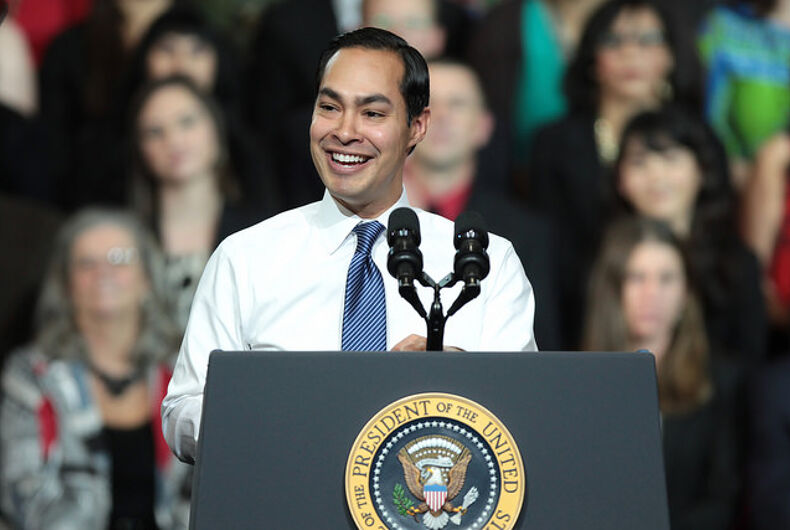 Pretty much every politician has probably looked in the mirror at some point and thought, “I could be president!” Of course, most decide not to run, but in the current election cycle, you have to wonder if anyone says, “Never mind.”

The latest candidate to make it official is Julián Castro. Castro is hardly a household name, but he’s a party insider who has long been tagged as one of the rising stars of the Democratic party. At age 44, he’s also among the youngest of the would-be contenders. Here’s a handy guide to Castro and his candidacy.

His resumé. Castro’s mother was a political organizer, so he came to his career naturally. A graduate of Stanford and Harvard Law, Castro began his political career in 2001 as a member of the San Antonio City Council, becoming mayor eight years later.

His first moment of national attention came in 2012, when he delivered the keynote address at the Democratic National Convention. He joined the Obama administration in 2014 as Secretary of Housing and Urban Development, making him the youngest Cabinet member. He stayed in the position through end of Obama’s term in office.

He also campaigned for Hillary Clinton in Iowa, which got him on her short list of potential VP candidates and a reprimand from the U.S. Office of Special Counsel for endorsing a candidate while working as a public servant.

Related: Here’s a quick guide on Elizabeth Warren, the first of a slew of Dems who want to run against Trump

Campaign theme. Immigration will be a natural topic for Castro’s campaign, although he hasn’t established himself as a policy thought leader on the issue. In that sense, Castro isn’t like rival Elizabeth Warren, who has a well-defined focus on income inequality. Castro will have to find a campaign theme that separates him from the pack if he’s to come across as something other than a generic candidate.

LGBTQ record. Castro staked out pro-LGBTQ positions early in his career. As mayor, he served as grand marshal for San Antonio’s pride parade and successfully pushed for a city nondiscrimination ordinance. Castro also joined other big-city mayors in support of marriage equality.

For his support of LGBTQ issues, Republicans branded him “the lethal tentacle of Obama.” At HUD, Castro continued his advocacy; after his departure, he criticized the Trump administration for its policies, including its refusal to collect LGBT census data.

Pros to his candidacy. There’s no question that Castro is smart (and ambitious). He’s also is young, which stands in sharp contrast to the Elizabeth Warren-Bernie Sanders-Joe Biden tier of candidates, who will be in their 70s and 80s on Election Day 2020. As a Latino, he appeals to the diverse Democratic base and is well positioned to take on President Trump’s white nationalism.

Cons to his candidacy. Being a mayor (even of a large city) and Secretary of HUD isn’t exactly a ticket to the Oval Office. Castro isn’t especially well known outside of Texas. By contrast, fellow Texan Beto O’Rourke has national visibility and momentum behind him from his recent Senate race and is also considering a run. Castro also lacks foreign policy experience, which will exacerbate concerns about his relative youth.

Odds. Pretty slim. Castro doesn’t have a strong base or campaign infrastructure upon which to draw, plus most voters don’t know him. Of course, Barack Obama was just a freshman senator when he ran for president, but Castro shouldn’t count on lightning striking twice.