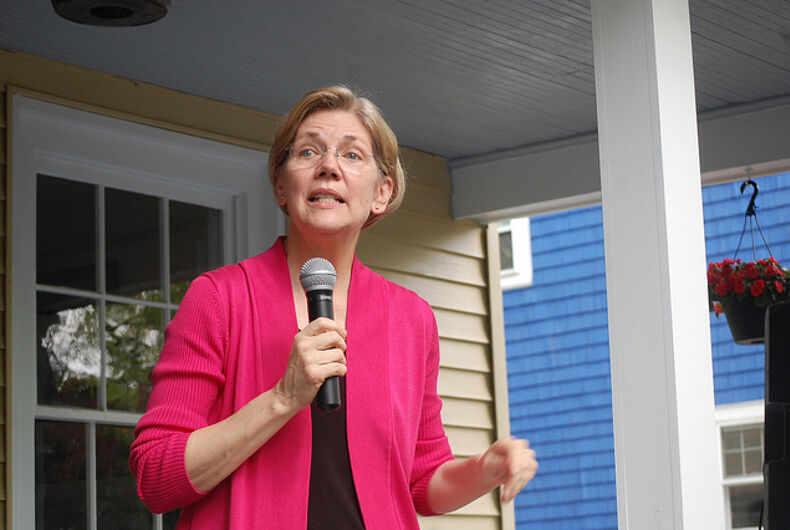 Elizabeth Warren is the first Democratic contender to officially declare herself as a candidate for the nomination of president. (Well, she’s formed an explatory committee, which is a bit like saying you’re thinking about a vacation as you board the plane to Miami). Warren will likely be joined by at least a dozen other Democrats jockeying to run against President Trump. In fact, by the time the race is fully underway, there may be enough candidates to fill a banquet hall.

Keeping track of so many candidates will be difficult, so we’re providing a handy guide for each of the candidates as they declare they’re running. We’ll look at the pros and cons of the politicians candidacy, his or her record on LGBTQ issues and the odds of their campaign’s success. Here’s the first in what promises to be a long series throughout 2019.

Her resumé. Warren began her career as an academic, eventually working her way up to become a professor of law at Harvard. An expert in bankruptcy law, she was appointed to a Congressional oversight panel during the 2008 financial crisis, where she made her mark as the foremost advocate for the formation of the Consumer Financial Protection Bureau (which Trump has been gutting).

Eventually she decided she wanted to be a full-time policy maker and successfully ran for Senate from Massachusetts in 2012, defeating incumbent Republican (and Cosmo centerfold) Scott Brown. In the Senate, Warren positioned herself as a consumer advocate and Republican scourge.

Why she’s running (in her own words). “Our government is supposed to work for all of us, but instead, it has become a tool for the wealthy and well-connected. If we organize together, if we fight together, if we persist together, we can win.”

Campaign theme. It’s all about workers. Warren made her reputation as a consumer advocate, and she’s capitalizing on the growing uneasiness about income inequality. She’s arguing that the system is stacked against working and middle-class people, in favor of the wealthy, and that the time has come to right the balance.

Her LGBTQ record. Warren came to office pledging to be strong advocate for LGBTQ rights, staking out a stand for marriage equality before President Obama did. She has been a vocal opponent of some of Trump’s worst nominees, including Jeff Sessions, Neil Gorsuch and Brett Kavanaugh. She was among 19 Senators that urged Trump’s Department of Health and Human Services to keep collecting data on LGBTQ people. All in all, Warren has been a dependable ally for the community, earning her a 100 percent voting scorecard from the Human Rights Campaign (HRC).

Pros to her candidacy. Warren is already a national figure, and she has established herself as a leader of the Democratic opposition to Trump. Trump has already done her the favor of singling her out, with a racial slur.

Warren is smart but she doesn’t talk down to her audience like a Harvard academic might. No wonder she was a big hit on her regular appearances on the Jon Stewart show before she was in the Senate. She has a record of actually getting things done; the Consumer Financial Protection Board owes its existence to her. Moreover, as a woman, she appeals to the Democrats’ embrace of diversity.

Cons to her candidacy. Warren isn’t the only potential candidate talking about the unfairness of the economic system. Fellow Senator Bernie Sanders was there first, with a credible run for the nomination in 2016. Warren will have to differentiate herself from Sanders so that they aren’t fighting over the same voters.

Warren also has some other issues. She’s weak on foreign policy. She can prove tone deaf, as her attempt to prove her Native American ancestry proved. She’s also dogged by some of the bad media habits that plagued Hilary Clinton’s campaign; lately she’s been subject to a series of thumb-sucking analyses about how “likeable” she is, a turn of phrase not applied to her male counterparts. Finally, Warren is already 69. For a party looking for fresh leadership, she’s a throwback to the Baby Boomer generation.

Her odds. Warren is in the top tier of candidates. Of course, the first caucuses and primaries are a year away, and a lot can happen between now and then. But she’s already built a strong campaign machine, and barring the unforeseen, she’ll be a formidable candidate once the campaign gets underway early next year.