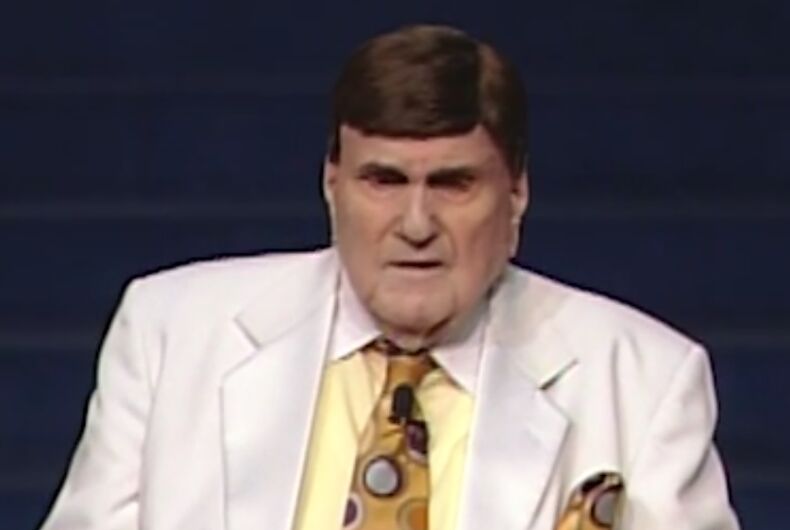 An internationally known and virulently anti-gay televangelist admitted to having sex with another man in a taped conversation.

Ernest Angley, 97, is the founder of Grace Cathedral in suburban Akron, Ohio. He is perhaps best known for his weekly television show, The Ernest Angley Hour, which is broadcast all over the world.

A 1996 taped conversation between Angley and his then-assistant minister, Bill Davis, was given to the Akron Beacon Journal last month. On the tape, Angley can be heard admitting to having a sexual experience with another man.

Related: Antigay pastor is ‘a danger to every child in this community’ as ‘many more’ victims possible

Davis’s wife Regina was angry that Angley scolded her for being “vulgar,” and Davis decided to talk to Angley about it.

“She was so angry over that word ‘vulgar,” Davis can be heard saying on the tape.

“Angel” is Angley’s wife who died in 1970. The name of Angley’s alleged male partner is being withheld because he may have been the victim of sexual abuse.

Davis: “Well, you was both naked in that bed.”

Davis: “Well, you was in there naked.”

The conversation was recorded by Davis, who then kept the tape hidden for decades. He is not the person who released it (that person’s name has not been made public), but he did talk to the Akron Beacon Journal about it.

Davis said that he learned what happened in 1996 when the other man came to him for counseling. The man said that he and Angley had five sexual encounters, including one in the church’s Sunday school room.

When Davis eventually confronted Angley, he said that he would not make the accusations in public, although he did soon leave the church.

He said that Angley then attacked his reputation, accusing him of being an alcoholic who had sex at the church.

“That man did his best to destroy me,” Davis said.

When asked why he didn’t release the tape, he said that it “would hurt more people than it would help.”

But the tape became a rumor that spread, and the church’s membership declined sharply.

This wouldn’t be the last time Angley faced accusations of sexual impropriety with boys and men.

In 2014, another assistant pastor, Brock Miller, quit the church, alleging that he had been sexually assaulted by Angley.

At the time, Miller wasn’t ready to go public, but people in the church heard about the accusations.

Miller said that Angley “forced” him to undergo a vasectomy in 2004 before he got married, something that others in the church have said that he encourages men to do so that they’ll have more money to give the church.

Angley allegedly asked to inspect Miller’s genitals and then asked him graphic questions about his sexual relationship with wife.

At some point in 2014, Angley responded to the accusations during a sermon at the church, which was recorded and made public.

In the recording, Angley admitted to encouraging boys and men in his church to get vasectomies, which he said “helped so many of the boys down through the years.”

He also said at the time that he would inspect their genitals, even though he’s not a doctor.

“They had their misgivings,” he said in a church service in 2014, which was recorded and made public. “Sure, I’d have them uncover themselves, but I did not handle them at all.”

“And I would tell them how that would work. And they’d have to watch it. I’d have some of them come back to me that I felt needed to. And I would tell them, I would look at them, their privates — I, so I could tell how they were swelling. I was a farm boy. We thought nothing about undressing. We didn’t know about homosexuals. We talked about women.”

In the 2014 recording, Angley denied being gay.

“I’m not a homosexual. God wouldn’t use a homosexual like he uses me. He calls me his prophet, and indeed I am,” he said. “They called Jesus a homosexual, did you know that? And still do. Because he was with men.”

Last August, though, Miller was ready to go public and sued Angley.

Angley denied Miller’s accusation and has counter-sued him for defamation.

The televangelist has a long history of making anti-gay comments.

In his book Oh, God, What a Mess!, he wrote, “Homosexuality is vile, vile before God; and it will send souls to hell.”

Miller said that he was angry that Davis effectively covered up Angley’s abuse. He said that he even confronted Davis about not releasing the tape earlier, when it could have stopped Angley from hurting more people.

“Brock [Miller] is mad at me, but he doesn’t know I suffered just like he did,” Davis told the Akron Beacon Journal, even though he has not said that he was sexually abused by Angley.