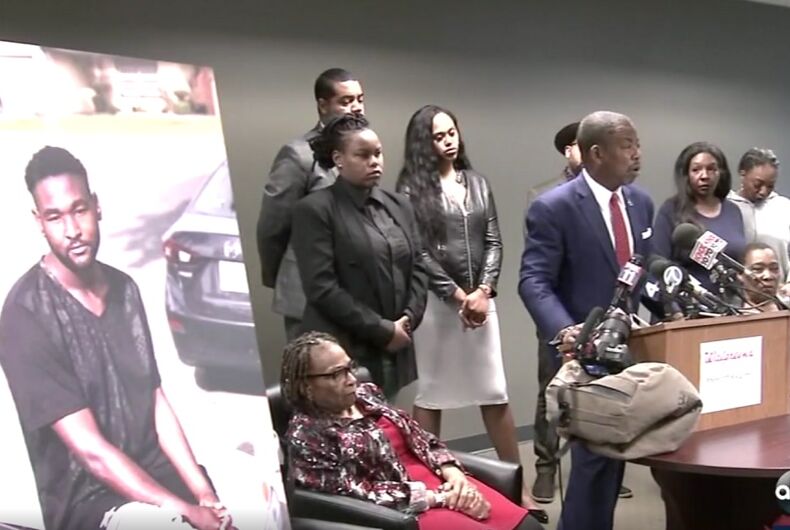 The family of man who was fatally shot by a security guard at Walgreens is suing for $525 million, alleging that he was killed because he’s black and gay.

Jonathan Hart, 21, was killed at a Walgreens in Hollywood, California, earlier this month. The LAPD said that Hart was shot in the back of the neck by a security guard and later died at the hospital.

His family’s attorney, Carl Douglas, said it was because he was homeless, gay, and black. He said that the guard accused Hart of shoplifting, even though he was there to get a water flavoring product.

“The guard raises his gun and points at the man. The guard says, ‘Freeze,’ as the man travels toward the door. The guard fires one shot, striking the man in the back of the neck,” Douglas said.

Related: This transgender woman was discriminated against by Walgreens. She fought back & won.

Douglas said that it’s not just a case of excessive violence, but targeted discrimination.

The lawyer also said that Walgreen’s only has security guards at stores that are frequented by people of color.

“Each of these stores are in the black, brown and homeless and LGBT communities, and we want to know why,” he said.

The family is suing for $525 million, and they also want District Attorney Jackie Lacey to press charges against the security guard, who has not been arrested.

The lawyer also called for a boycott of Walgreens.

Walgreens issued a statement saying that they “immediately terminated the security company” and gave “our deepest and most sincere condolences” to the family.

“We contract for armed and unarmed security, as well as video surveillance, in our stores based on the public safety needs of each location,” the statement said. “We operate in thousands of communities and neighborhoods across the nation and the suggestion that we would inappropriately serve any community is simply false. We firmly believe everyone should be welcomed and treated equally in all of our stores.”