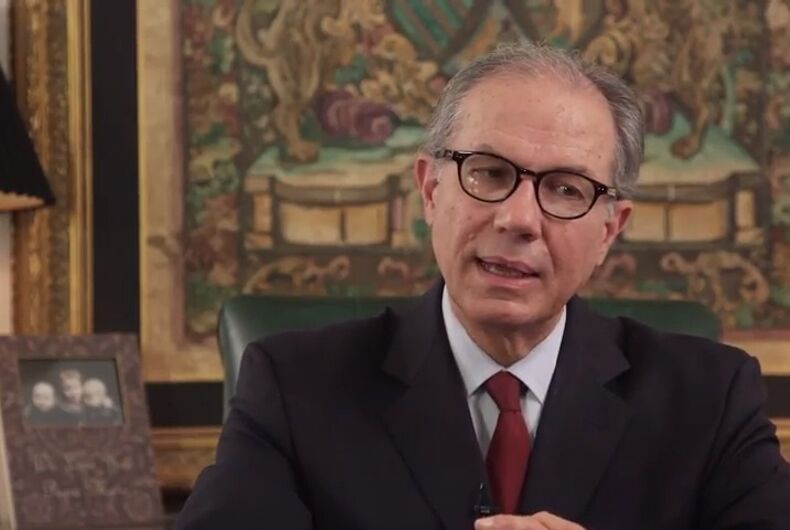 You wouldn’t expect a lot out of Oklahoma. After all, this is the state that passed a law banning gays and lesbians from adopting and where a state legislator said gay people were a bigger threat to the nation than terrorists. But just when you think things can’t get any worse, along comes governor-elect Kevin Stitt to choose the chair of a far-right anti-LGBTQ group to head his transition team.

Marc Nuttle has been board chair of the Oak Initiative, a South Carolina-based Christian group whose stated purpose is to “Unite, mobilize, equip, and activate Christians to be the salt and light they are called to be by engaging in the great issues of our time from a sound biblical worldview.” Oak Initiative achieves this goal by trashing LGBTQ people, Muslims and liberals and promoting crazy ideas.

The people behind the Oak Initiative are among the worst bigots on the scene today. Its President Rick Joyner blamed Hurricane Katrina on gay pride celebrations in New Orleans and Key West because God “was saying, He’s not gonna put up with this perversion anymore.”

Retired Lt. General Jerry Boykin, a board member, complained that nondiscrimination protections would mean “we’re going to be forced to accept what Adolf Hitler forced the church to accept in Germany in 1937,” and said of transgender bathrooms that “the first man that walks in my daughter’s bathroom, he ain’t going to have to worry about surgery.”

There’s also self-proclaimed prophet Cindy Jacobs, who once said that the repeal of Don’t Ask, Don’t Tell was leading to a rash of bird deaths, and Janet Porter, who was Roy Moore’s campaign spokeswoman and blamed gay people for the coming end of the world.

Of course, Nuttle is perfectly matched with the Oak Initiative. His main claim to political fame is managing Pat Robertson’s 1988 presidential campaign. He too has engaged in vicious attacks on the LGBTQ community, claiming that marriage equality was a “dress rehearsal” for Biblical end times and that LGBTQ rights represented the biggest threat to Christianity in America.

Nuttle stepped down from the Oak Initiative to take handle Stitt’s transition but it says a lot about Stitt —and about the current state of Republican politics in general — that such a fringe figure as Nuttle would hold such a powerful position.

No doubt he will be looking for characters who buy his particular brand of hatred to join Stitt’s cabinet, which means LGBTQ Oklahomans are in for a rough four years.

These 6 possible U.S. Supreme Court cases could determine the future of LGBTQ rights