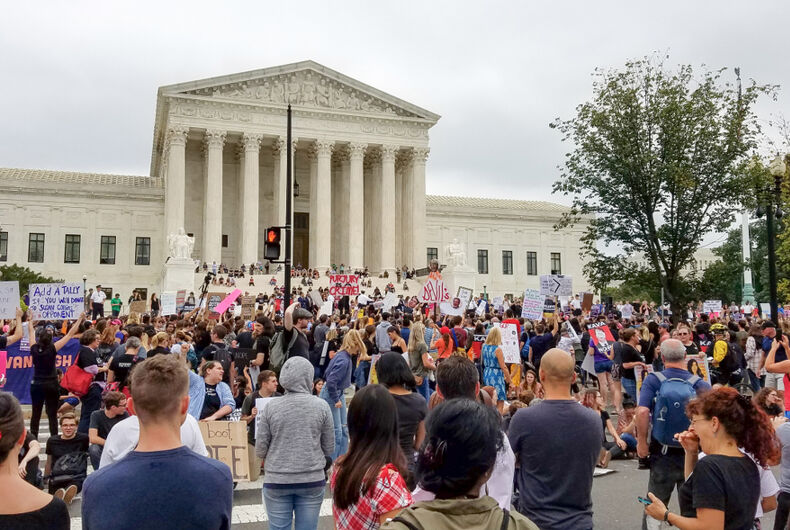 The U.S. Supreme Court has six cases before it that could determine the future of LGBTQ rights nationwide, says Zack Ford of Think Progress. While the court hasn’t yet agreed to hear any of these cases, let’s take a quick look at them and the issues involved in each.

Bostock v. Clayton County, Georgia – Gerald Lynn Bostock says he was fired from his position as a county child welfare services coordinator because he’s gay; his employer alleges that he mismanaged program funds.

At question is whether Title VII of the 1964 Civil Rights Act covers sexual orientation as part of its protections against discrimination based on “sex.” Several Supreme Courts in other states have said that it does, since anti-gay discrimination is based on an idea of how men and women “should” act. The most recent ruling in this case said Bostock’s firing was legally allowed.

Zarda v. Altitude Express – In 2010, skydiving instructor Donald Zarda claimed that his employer fired him for being gay. Though Zarda has since died, his estate continued his lawsuit, stating that Title VII protects employees from anti-gay discrimination. The most recent ruling in this case said Zarda’s firing was illegal.

Related: This is what it looked like seconds after the Supreme Court announced marriage equality

R.G. & G.R. Harris Funeral Homes Inc. v. Equal Employment Opportunity Commission – Aimee Stephens worked as a funeral director for six years at a funeral home in Michigan but was then fired after coming out as a trans woman. At question is whether the 1964 Civil Rights Act protects people from being fired for their gender identity. The most recent court ruling in his case said that Stephen’s firing was illegal.

The Trump administration has signaled its belief that the Civil Rights Act doesn’t cover sexual orientation or gender identity.

Trump v. Karnoski – Last holiday weekend, U.S. President Donald Trump asked the U.S. Supreme Court to issue a rush judgement on the legality of his ban of trans people from the U.S. military. Trump said his ban was meant to reduce medical care costs, but so far, three federal courts have blocked Trump’s ban, stating that it fails to further government interests.

Klein v. Oregon Bureau of Labor and Industries – In a case similar to the recent Colorado Masterpiece Cake case, in January 2013, the Oregon-based bakery Sweet Cakes by Melissa refused to make a wedding cake for a lesbian couple, violating the state’s non-discrimination law requiring businesses to serve all customers equally regardless of sexual orientation.

Ford points out that Sweet Cakes lawyers are arguing that business owners have a right to discriminate against anyone based on their religious beliefs, not just same-sex couples. Thus far, two courts have ruled against the bakery.

The anti-LGBTQ legal group Alliance Defending Freedom (ADF) is pushing the case. So far, courts have ruled against the ADF’s anti-trans reasoning.