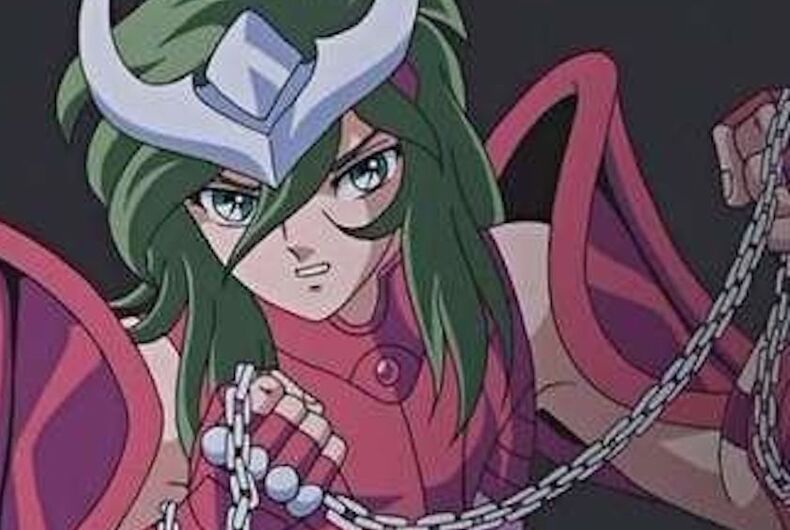 In summer 2019, Netflix will release its remake of the ‘80s- and 2000s-era anime classic Saint Seiya: Knights of the Zodiac, an animated series about five cosmic warriors defending Earth against vengeful Greek gods.

The original Japanese TV program featured a gentle male character named Andromeda Shun. Shun had long green hair, wore magenta armor, was openly emotional and always tried to resolve conflicts without violence, despite being a skilled warrior. As such, some Saint Seiya fans viewed Andromeda Shun as queer or at least a groundbreaking depiction of a male warrior.

However, Netflix’s remake will change Andromeda Shun’s gender to female, upsetting some fans.

Here is a trailer for Netflix’s Saint Seiya: Knights of the Zodiac.

On December 9, 2018, the show’s producer Eugene Son explained his decision to change Andromeda’s gender in a series of tweets, stating, “This one is all on me.”

The series has other strong female characters, but Son wanted to make one of the Knights female to avoid an all-male cast of protagonists.

“Thirty years ago,” he tweeted, “a group of guys battling to save the world with no girls around was no big deal. That was the default then.”

He continued, “Today the world has changed. Guys and girls working side-by-side is the default. We’re USED to seeing it. Right or wrong, the audience could interpret an all-male team as us trying to make a STATEMENT about something…”

Interestingly, fans seem divided over the gender-swap. Some don’t particularly mind the female inclusion, but others feel it betrays the subversive spirit of an “openly emotional, pretty, strong, non-macho male lead.”

Generally speaking, Netflix has done much to elevate strong LGBTQ and female characters. But its attempt to be more inclusive here may prove a misstep. We’ll see if the viewers agree.

Who were the worst politicians of 2018? The list is practically endless.